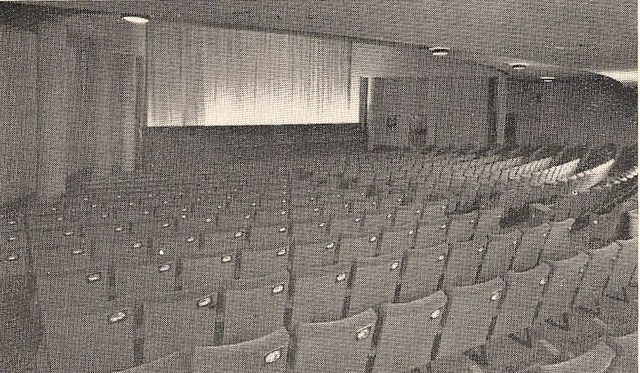 Located in the city centre at 127 Above Bar. Built for Associated British Cinemas(ABC) and designed by their in-house architect William R. Glen, the Forum Cinema opened 22nd June 1935. It had 1,909 seats in stalls and circle together with a cafe, there was also a stage (48 feet wide proscenium) and seven dressing rooms. Decorative grilles were prominent either side and above the stage opening, concealing the pipes for the Compton 3Manual/10Ranks organ - one of the first instruments with the Melotone unit which became standard subsequently.

The Forum Cinema was damaged during the war and was closed for several months.

After a period of disuse it was converted into a large bar in around 2000, known as the Square Balloon. By 2019 it was a nightclub named Switch. There is a 135-seat fringe theatre named Stage Door Theatre which is located upstairs in the former cafe area, using an entrance at the rear of the building at 78 W. Marlands Road. This presents cabaret & burlesque.

Exterior photo of the Cannon here:–

I rated the ABC FORUM as the best in presentation, followed by the GAUMONT (former Empire), Rank’s PLAZA then Rank’s ODEON.

Does anybody know of or have a complete list of all of the (many long-gone)cinemas and theaters in the greater Southampton area?

I rated the ABC FORUM as the best in presentation, followed by the GAUMONT (former Empire), Rank’s PLAZA then Rank’s ODEON.

Does anybody know of or have a complete list of all of the (many long-gone)cinemas and theaters in the greater Southampton area?

Notes from “100 Years of Cinema in Southampton” by Patrick Hayward;
Best known as the Forum Cinema, they often shared films with their sister" ABC’S Broadway in Portswood.

More of Patrick Hayward’s notes; Noted entertainers to grace the (former) Forum’s stage from 1962 on were Helen Shapiro, Billy Fury & Marty Wilde, Cliff Richard, Billy J. Kramer, The Kinks, The Yard Birds, Cilla Black, The Bachelors and handsome American sensation Gene Pitney.
The final live stage show was The Walker Brothers in 1966. However, I personally remember attending an all-seats-sold, “New Year’s Eve Concert,” provided by England’s master Big-Band leader Ted Heath. I had a ringing sound in my ears for days but the music was the best!

Now Switch nightclub with the Stage Door, a fringe theatre, upstairs and So:Cake tearoom both accessed ‘round the back.