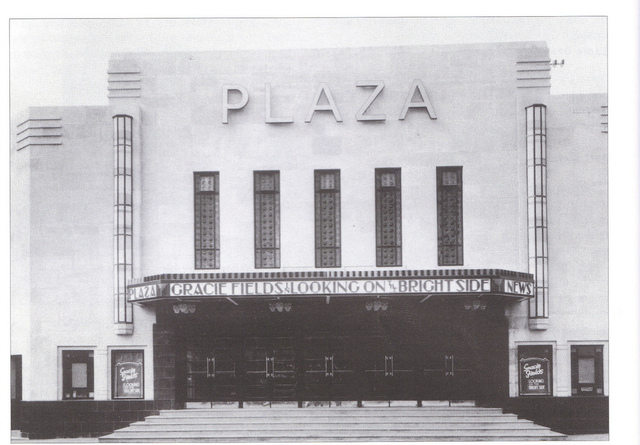 This massive "white elephant" of a cinema was originally owned by J.G. Spinkernell who employed Robert Cromie as chief architect, with interior decorations by Mollo & Egan. The Plaza Cinema was a super cinema but located too far out of the city in the Northam eastern suburb, next to Northam Bridge and the River Itchen. It was clearly seen at night with three-colour floodlighting on its large white facade.

Built on the busy A27 road from Southampton to Portsmouth, this cinema was much bigger and luxurious than others. The main lobby could hold hundreds of guests especially during inclement weather. With wide stairs leading to the main floor and sweeping balcony. Patrons were treated to double seats in the back row, Leslie James opened the Compton 3Manual/8Ranks pipe organ with illuminated coloured lights inside of the console and varied traveler and lift curtains.

Opening day was with great fanfare on October 11th, 1932 by Mayor Fred Wooley. The Gracie Fields film "Looking on the Bright Side" was selected for openers because of her popularity at the time.

Two years after its October 11, 1932 debut, the Plaza Cinema went under the control of County Cinemas who provided a staff of three dozen to serve patrons. Then in 1937, the huge Oscar Deutsch chain of Odeon Theatres Ltd, gained final ownership and it played 2nd-run to the city centre Odeon.

The building was stripped of its grandeur and converted into new studios for Southern Television. These were later demolished and replaced by an office block, which has also been demolished to build housing on the site.

A mid 1950’s school chum of mine, John Bettinson, recently e-mailed me with some of his memories of the Plaza… which he “loved”. He and hundreds of other kids, who attended the Saturday morning programmes, for an admission charge of (6d) sixpence, often swapped popular American comics with each other after the show.

John also stated that he thought the Plaza had the biggest cinema screen (not London?) on England’s south coast.

I would personally appreciate anyone who could verify that with factual information as well as auditorium photos.

There are inaccuracies in Simon Overton’s description above. The Plaza was not beside the River Test,it was beside the River Itchen,& it was not a rickety wooden bridge, it was an iron bridge, which was replaced by a concrete bridge in about 1952,& still stands. This required taking practically all of the front car park, because the new bridge was built alongside the old bridge,which would be demolished later . I should know,I lived & played right next to the Plaza for 27 years, & I was still there when it became Southern TV. Three times a week there was a change to the films, which always came to the Plaza after they had previously been shown at the Odeon in the town centre. On Sundays there was always the regular serial . Flash Gordon with Buster Crabbe was the one I remember well. There were the Saturday morning shows…6d downstairs, 9d upstairs. On your birthday you would be given a free ticket & you could take a friend to any priced seat free of charge. Sometimes you would get free Knick knacks on your way out. I remember getting the paper rocket making kit to promote “Journey to the Moon”. Yes, & there were the American comic swaps, but the date on the comic was the all important thing. You could never swap last years for this years. The site is now flattened, with the ground level being raised higher than it was beside the river Itchen, probably because of the increased risk of flooding these days, in preparation for another lot of new housing. This Northam area had experienced flooding in the past, but before my time Martin .uk

The television studios used by Southern Television was called Television Centre Southampton(it has it’s own page on Wikipedia.