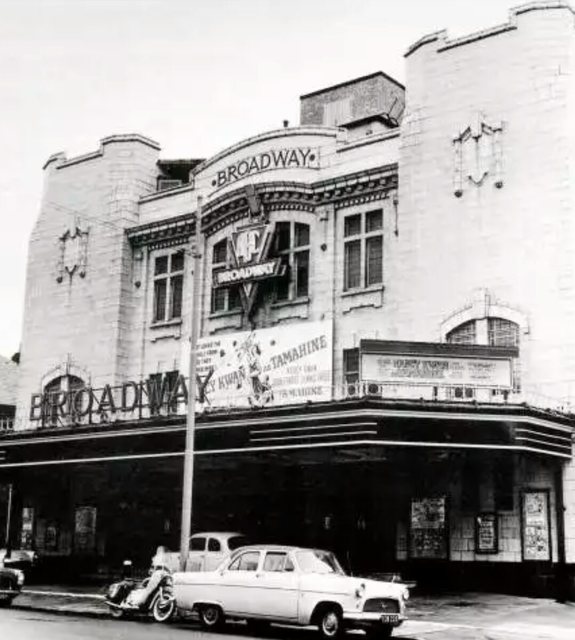 There were, and still are three "high" points of interest about the Broadway Cinema, just a few yards down the road from the now-closed Palladium Cinema; its high towering facade, built high off the road, and high mounted stage. This author had a bad case of neck ache from sitting in the front row of the stalls.

The decoration theme was set in the days of King Arthur and Camelot with wood panels and painted plaster resplendently revealing a Disney-style castle. The film "Rookery Nook" starring Tom Walls, welcomed 1,546 movie-goers on June 6th 1930. Like many other cinemas of the 1930 era, a small restaurant was located at balcony level. Surprisingly, no pipe organ was installed but four VIP guests boxes offered side stage viewing. A local dance band often gave live performances to thrilled audiences on occasional Sunday evenings.

From 6th January 1936 it became part of the Associated British Cinemas(ABC) circuit. The ever-popular ABC Minors Club presented Saturday morning programmes for children for the price of six-pence and some of their names are clearly seen carved in the brickwork while they queued outside.

It closed on 26th October 1963 with Diana Doors in “West 11” and John Neville in “Unearthly Stranger”. The ever popular game of bingo was introduced and operated as a Mecca Bingo Club until around 2010. It is now a church.

Most of my Saturday mornings were spent at the ABC Broadway as a member of the ABC Minors Club. For the price of six-pence, it was four hours of delight.
Birthday kids were invited onto the stage (I had five or six birthdays a year!) and the shone the follow-spotlight across us while the audience screamed their lungs out to “Happy Birthday.” They also played a scratchy old film and recording of the famous song and dear old “Uncle Bob” was Master of Ceremonies. We would all sing the “Minors Song” and receive a free pass for the following Saturday. I still have my old 45rpm record of it.

My St. Mary’s School chum, Martin Rabley and I, preferred the balcony because viewing was better than the awfully low seats downstairs. The noise of us unruly kids must have been pure bedlam but the thrilling serials were spectacular with “Flash Gordon” and “The Lone Ranger."
Then it was home to lunch of "bangers & mash and playing in the huge fields behind my country home in Bitterne -such happy days.

The Broadway became home to the Victory Gospel Church, branded as “The Victory Centre”, about three years ago.