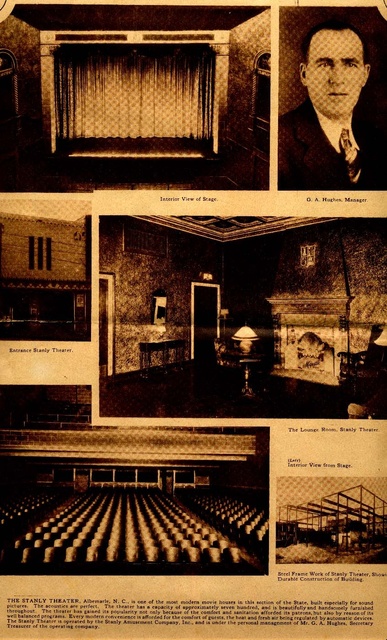 Opened in 1930 as the Stanly Theatre, it retained this name into the 1950’s. The Center Theater was part of the Stewart & Everett chain in the early-1960’s.

There is a long abandon theatre with an art deco faÃ§ade at 227-9 West Main. Could this be the former Center/Stanley? If this is the case the status should be changed from Closed/Demolished to just Closed.

This building was not the Center theater and has never been a theater. This building was novalilty store. The Center theater was across the street and a block down. Albemarle has had several different theaters over the years. An open air theater, Albemarle Opera house, Columbia, Stanly, Center, Victoria, Lyric and the Roxy. I have photos of many of these and will post. The Stanly opened in 1930 to replace the Columbia that was two building down the street, West Main. The Stanly burned in the late 30’s and was rebuilt. In the 60’s it was closed, redone and reopened as the Center. The Victoria was on East Main and later became the Roxy. Lyric was on South Second Street. Alameda is on North Second Street.

The stone floor at the entrance of the Stanly/Center theater fell in this past summer. The building is in bad shape and is not for sale.

The Building Vac and Dash is in was the Columbia Theatre. The Smith and Biles families built the Stanly Theatre and the owner of Columbia closed and managed the Stanly.

Per this article http://www.thesnaponline.com/news/local_news/art-teacher-captures-history-of-downtown-movie-theatres/article_9605c050-3c84-11e6-a621-4f4a2172c15b.html the building is not demolished, just derelict.