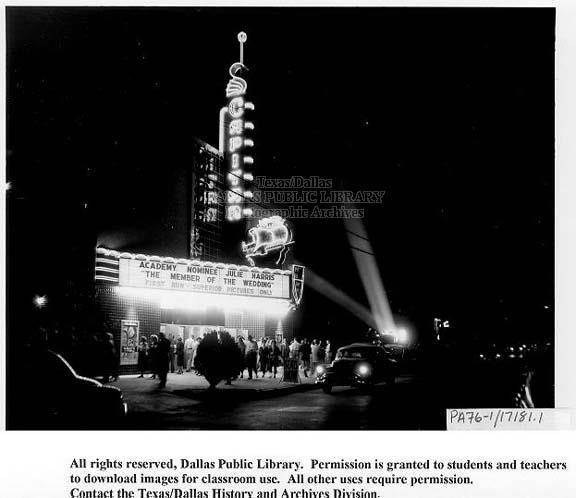 The Capitan Theatre was opened in 1946.

A movie theater ad from 1949 for the Capitan Theatre in Dallas.

The Capitan Theatre was nearing completion according to the July 20, 1946, issue of Boxoffice. It was part of the Underwood-Ezell circuit.

Here is a link to a photo in the Dallas Public Library digital archives that shows the Capitan Theater at night, 1952 – marquee says “Member of the Wedding.”

Thanks for the movie ad.

Does anyone know why this theatre was torn down after only nine years' operation?

The last ad I can find for the Capitan in the Dallas Morning News archives is for Saturday, January 1, 1955; a double feature, “Betrayed” with Clark Gable and Lana Turner, and “Rancho Notorious” with Marlene Dietrich. No article announces the closing. The ads simply disappear after this date.

Historic Aerials' latest view of the intersection of Henderson and Capitol showing the theatre building is 1958; next view is 1972, and the building is gone.

The picture of the Capitan Theater is from March 21, 1953 when the theater went to art films including foreign films and revivals. The large theater was run by Lewis and Susman with a capacity of 1,150 seats. The theater at the corner of Henderson and Capitol opened August 23, 1946 with “Do You Love Me?” Within six months of the theater’s opening, a high profile murder case occurred when a man was murdered when he was seated by his ex-wife by his ex-wife’s current husband.

The Capitan changed managers from Lee Roy Ball to William Lewis in 1948 as it tried to find its footing and relied heavily in matinee bookings on children’s and family fare. With theatrical tastes changing and general box office woes plaguing theaters all over the country, the Capitan rolled the dice and became an art house on March 21, 1953. Another innovation was that the theater banished popcorn from the concession stand and switched to higher end chocolate. The first film was a sell-out but competition for the art house especially the Varsity/Fine Arts in University Park and the Coronet in Dallas dogged the Capitan as the art concept faltered badly.

Less than a year into the art run, William Lewis resigned from the theater on January 6, 1954. The Capitan closed less than two years into the art concept on January 1, 1955. Not quite nine years was all the theatrical life of the property as it was converted for other purposes.

The building was sold to Charles Weisenburg who converted the property into the rather unique Capitan Bowling Center which opened on March 1956. The unique space of the theater allowed for two floors of bowling, each with ten lanes. Neighbors protested the lanes when it went 24 hours in 1958 demanding soundproofing and greatly reduced hours of operation. A bowling alley boom overpopulated the city of Dallas and in December of 1962, Weisenburg shuttered both the Capitan Bowling Center and the Industrial Lanes. The oldest lanes in the city, Hap Morse Lanes and Mickey Mantle’s Lanes also closed. Weisenburg closed the lanes and sold the building.