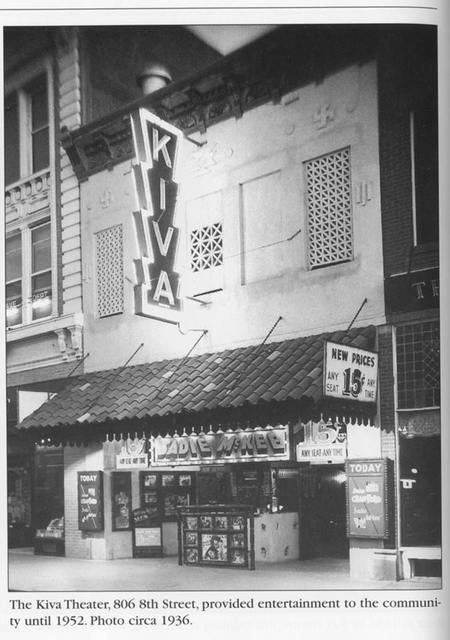 The Kiva Theatre opened June 30, 1933, in a building dating from 1886 that had previously been used for retail. After the Kiva Theatre closed March 29, 1953, it was converted back to retail use, last housing a ski shop. Today the building is vacant and for lease.

The Kiva opened with “The Circus Queen Murder” on June 30, 1933 as part of the Westland Theatre Circuit in a repurposed former retail store. The American Indian atmospheric architecture was intriguing and had a western flavor though sometimes falling over into kitsch including the wagon wheel chandelier and totem poles outside the theater as well as an Indian chief’s head in the logo of the theater’s advertisement and coming attraction boxes. The alliterative “Kiva: Kool and Komfortable” was a tagline. The Theater likely had a 20-year lease closing 20 years after its open on March 29, 1953 with the films, “Raiders of Sunset Pass” and “Cattle Town.” The theater returned to retail on July 9, 1953 as a Lee Jewelry store that would become a Zales operating for the next 23 years.