This reopened as the Fox Van Nuys on September 24th, 1958 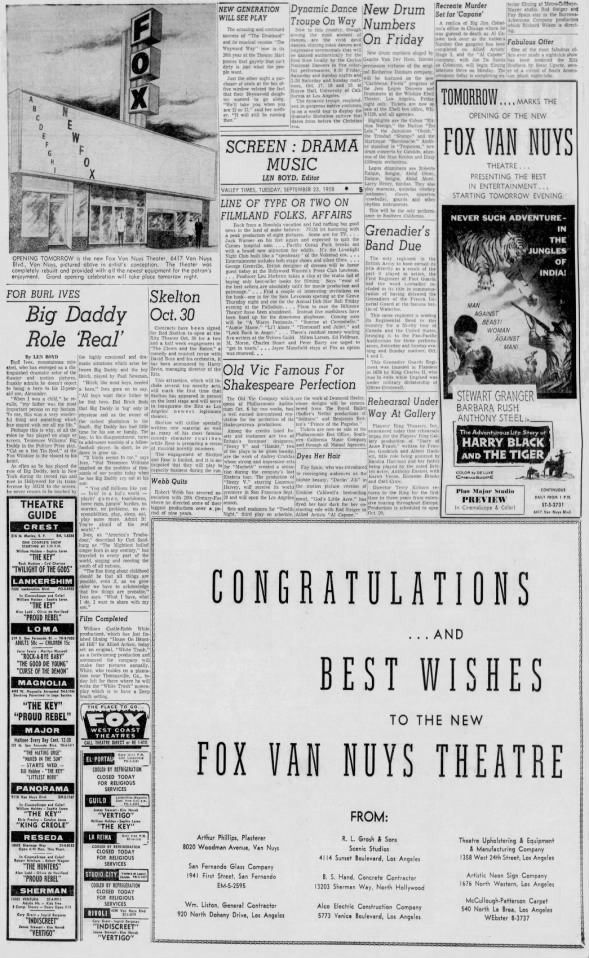 The original Van Nuys Theatre opened May 26, 1917. The New Van Nuys Theatre relocated from Sherman Way to its new $35,000 home in the Shacklett Building on Van Nuys Blvd. The theatre launched with Rinty in “Find Your Man” October 9, 1924. On August 2, 1936, the theatre along with the Rivoli become part of the Fox West Coast Circuit. It was renamed the Fox Van Nuys Theatre, a moniker it held until its closure. Though when Fox was forced to divest itself of theaters by consent decree in 1951, National General took on the Fox West theaters. In March of 1973, the sale of National General to Mann Theaters was announced and became effective in July 1973. Mann would drop the theater at the end of January 1977 with the theater becoming an independent in February 1977. A month into its indy run the Fox Van Nuys becomes a sub-run 99 cent house.

I worked in this theater in 1953. I couldn’t stand the uniforms they made us wear, so I quit and worked at the Rivoli where they didn’t have uniforms. A guy named Sloane was the manager and the asst’s name was Allsop. Not a fun job.

Minimum wage in those days…$0.65 per hour

Remember seeing in the 60’s mostly Doris Day films. Was luxurious to me as a kid, and I remember quite big, even compared with Panorama Theatre where I went all the time and was a separate building. The main entrance and the lobby had a special grandeur to it which was more like the Hollywood cinemas. Nice to see the old postcard with Van Nuys Blvd….those were the days.

I grew up in Van Nuys and my mother took us to the movies every Fri. night or Saturdays. I think i remember the FOX theater had another name before it was called the FOX? Doeas anyone remember this? ==

Another tidbit for you, The Fugitive episode called “See Hollywood and Die” (veoh.com) was shoot in the valley. You can catch the south part of VNB with Ontra’s cafeteria also 110 frwy sans traffic.
i must get a life….

If anyone wants to see a shot of Van Nuys Blvd. and Sylvan St. from the 1960’s watch the opening sequence of Jerry Lewis' “The Family Jewels”. I remember what a kick it was watching it at the Fox and seeing the theater I was in on the sceeen. Also saw A Hard Day’s Night there and remember girls were screaming in the theater.
Now that was real Beatlemania…..

There are vintage photos that show the Fox here

There’s over a hundred more scans of Valley post cards at that site.

Does anybody remember the Biffs restaurant at the corner of Vanowen and Van Nuys blvd? When did it go out of business? Great burgers there.

Also I would like to add to my first comment. Our class toured The Daily News in January of 1960, I do have a picture of our class on the field trip. And the newspaper clipping they gave to all of us that attended. (Memories) although I can’t even remember the names of my classmates..lol

I can remember growing up on Calvert St & Delano in Van Nuys, CA during 1955-1957. Used to go to Delano Elementary? Did they change the name? I was around 5-6 yrs old. We had to move to make room for the Police Station and I remember there being an ice skating ring there, anyone remember this?

Here is an August 1960 ad from the Van Nuys News:
http://tinyurl.com/lbzg9n

My uncle was the 17 year old manager of the Van Nuys Theater when Marilyn Monroe (Norma then) was a “candy girl” with him.
My mom (last name Shields) oldest girl of 9 children, grew up on Archwood St. between Kester Ave and Cedros Ave.
They also took the Red Car to Hollywood Bl.
My grandfather was the first employee manager of the first trash co. in the valley G.I. Rubbish Co. now Waste Management Co.
All siblings attended Van Nuys High School and elementary school with names like Jane Russell, Bob Waterfield,Marilyn Monroe, and many more. Younger siblings went with Don Perdome and bunch I can’t remember now.
My mom worked at Thrifty Drugs on Van Owen and V.N.B., she also was a car hop at Bobs.
It’s fun to hear stories from them about that era (40s and 50s) when we get together. My mom is visiting from Nevada and we just now got back from driving around the valley she has been gone from Ca. since 1980. It’s so different she had a hard time remembering where things were!
Great site.

& the thread continues.
I used to eat and drink at the Moongate. I knew Phil and his sister Mary who ran the place. I also employed Mary’s daughter at the Americana Theatre which I managed. She was under age but I was directed from upper management to hire her. I also ate at the Red Barn directly across the street where Parthenia made a bend.

We would come home Friday afternoon, pick up a date and hit the ‘ol Fox
for an evening date …. then off to Phil Ahns “Moongate Inn” for late dinner.

Gotta comment. Back in the late 40’s my mother used to walk me over to Vose Street and Van Nuys Blvd. to catch the Red Car which then went down the center of VNB and turned left on Chandler and over the Cahuenga Pass and down Highland to Hollywood Blvd. to a theatre. The interesting thing about the Red Car was when we got to the end of the route the conductor pulled a box on a pipe out and took it to the rear of the car and started back. The Red Car yard was where the buses are at Sherman Way and VNB. The Red Car quit going out to Canoga Park in 1941.

I can’t find from previous posts but my first 3-D movie was at the Fox.

My Mom used to take me to the Thrifty’s lunch counter, then we’d catch the
‘ol “Red Car” (Pacific Electric) and ride to Glendale to visit my Grandmother.

For my birthdays, we’d always got to the Choo-Choo restraunt down the street on VNBL, and have our hamburgers served on a Lionel train ……

You won’t find any of that stuff around anymore …..
.com

I first went into that Thrifty’s in 1957 with girl friends. Our favorite order was a Cherry Coke that the waitress would call in as ‘One Virgin’ then after a short while we would change the drink to a regular coke just to hear her call it in as ‘rape it’. She had such a great sense of humor. She was even on to us for turning a water glass upside down with the cash register receipt and pull the receipt out. After the first time she grabbed the glass and water went all over she would put the bus tray up to the counter and slide the glass into it.

And wasn’t it Carl’s drive in across the street?

The guy that ran Heads'n'Highs was in a wheel chair.

How about Kings Western Wear with Levi’s for $3.25 each…

My dad had an optometry shop right next to the Fox in the 60’s and 70’s. It was actually part of the Fox property at the time and he was renting the space from them. He knew the manager of the Fox at that time and when I was little my brother and myself always were able to get in for free. I used to know the whole Van Nuys area extremely well. I haven’t been down to the area in a long time. I’m afraid of what it has turned into. Anybody remember eating at the restaurant in the Thrifty Drug store at Van Nuys and Vanowen? What great years those were. I’m sad my kids will never be able to have that type of childhood.

If you go into the head shop by the DWP and walk to the back, look up. The skylight still has the old ‘Heads n Highs’ grafitti and posters up there. The blacklight room is still there too, now an ‘employees only’ store room.

The Army Navy surplus store is still on the Boulevard too, though only a shadow of it’s former self.

My sister went to Winnetka about that time. Her name then was Sharon Gade. This is the best website. It’s nice walking down memory lane. Poor Van Nuys Blvd. That place use to be so nice now its a mess.