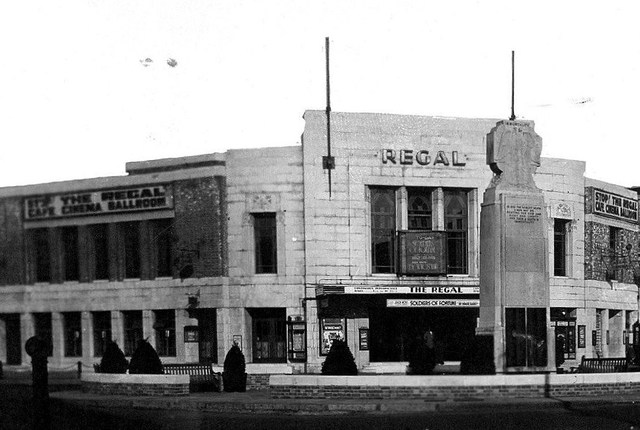 The Regal Cinema opened on 22nd September 1930 with Lawrence Tibbett in “The Rogue Song”. It is located in Beckenham, which today is a district on the extreme south-east of Greater London. Among the facilities on offer were a fully equipped stage, a ballroom, a restaurant located on the ground floor and a Wurlitzer Model F 2Manual/8Rank theatre organ which was opened by Reginald Foort.

It was operated by County Cinemas and in 1936 was taken over by the Union Cinemas chain. They had the organ rebuilt at the Wurlitzer London factory to become a 3Manual/8Rank unit with grand piano attachment and an illuminated ‘Rainbow’ console. The re-built organ was opened by Harold Ramsey on 25th January 1937.

The Union Cinemas chain were taken over by Associated British Cinemas (ABC) in October 1937 and they operated the cinema for many years.

It was re-named ABC from 22nd January 1962 and closed in November 1978 for conversion into a triple screen cinema. The balcony remained intact as Screen 1 with a seating capacity of 587 which re-opened on 21st December 1978. Two mini-screens were added in the rear stalls area under the balcony which seated 295 and 124 and these opened on 11th February 1979. The remainder of the auditorium (front stalls) and the stage became un-used. The restaurant remained open for many years as did the ballroom.

ABC were later taken over by Cannon Cinemas, who in turn were taken over by MGM, before reverting back to ABC in the late-1990’s.

Odeon Theatres took control in 2000 and proposed plans to convert the building into six screens. There was some controversy over the conversion of the ballroom into an extra screen, as this contained a great deal of the original Art Deco decoration and stained-glass windows. At this point in time it was operating as the Regal Dance Centre, which closed in January 2001.

The conversion went ahead and the six screen Odeon re-opened on 19th September 2001. The former ballroom is now Screen 2 with 207 seats, although a lot of the original decorative details have been retained, they are covered over. Screen 5 is located in the former front stalls area, using the original proscenium opening, and seats 207. Screen 6, also seating 207 is located on the former stage. The former restaurant is now an extension of the foyer and is used as a coffee bar.

The building is Grade II Listed.

A full view of the Odeon, Beckenham:
http://www.moviebunker.com/odeon_beckenham.htm

Photo of the auditorium uploaded. This was taken in the 1970’s when it was still the single screen ABC.