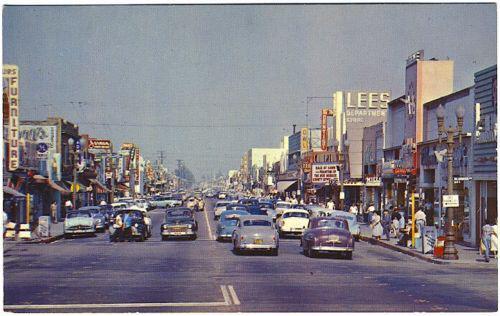 The Compton Theatre was opened in 1935, it was later a District 3 Fox house in its heyday. It was still open in 1956.

I remember The Compton – which was completely different from the Compton Symphony Theatre (which ceased to be in 1933). As noted, it was at 136 E. Compton Bl, which, if you were facing east and standing at the intersection of Compton and Willowbrook Av, was on the right side of the street. (I never remember the theater actually being open; I think Fox abandoned it at the end of the 1950s at the dawn of the “white flight” from Compton). It was in the block just before the major department stores, which included a JC Penney’s (which had the most exquisite mezzanine) and the JJ Newberry’s store (which had wonderful hardwood floors). I think people confuse the two theaters because Tamarind was a nearby cross-street for both. (That entire area was completely demolished in the 1970s, so all of this is from memory). There was a Bank Of America branch and the Compton Raceway (slot car racing) across the street. I once saw an interview with James Coburn in which he mentioned that, during his youth in Compton, he was hired to change the lettering on the marquee at the Compton Theater, which he did for a number of years.

I can’t believe that no one has a photo of this place which was in use until the ‘70’s. I’ll dig around.

Hello everyone, I came up with some images of the Compton and’ve put them online for all to enjoy — View link

I remembet this theater. But when I saw it, it was gated off. I remember seeing the box office, and there was trash everywhere. Last ive seen the sidewalk stores and theater was torn down and not its a strip mall.

Sorry about the spelling. I used my cellphone to post. Yes, Nathan. That’s the one. :)

When we lived on Butler Street in Compton in the mid 1960s we used to take a bus down Compton Blvd, to the Compton Theater and see films on a Saturday afternoon. Compton was a safe, wonderful community at that time. I remember the JC Penny store was very close.

The January 20, 1934, issue of Pacific Constructor had an item about a theater to be built on the site the Fox later occupied:

“COMPTON, Los Angeles Co., Cal.– W. Allen, 1008 Washington Bldg., Los Angeles, is preparing plans for a theater building to be built at 134 East Compton Blvd., Compton, for August Frankl, Sunset Theatres Co., lessee. The structure will have a seating capacity of 800 and will contain stores and offices. Reinforced concrete construction, composition roofing, concrete floors, structural steel, plate glass, etc.”A 618-seat house called the Compton Theatre is listed in the 1935 FDY, but was not yet listed as a Fox house. The Compton was most likely a replacement for the Symphony Theatre a few blocks away, which had been destroyed in the 1933 earthquake.

The architect W. Allen was probably William Allen, who was active during this period. He designed a number of civic buildings for the nearby city of South Gate, and the Streamline/Deco Burbank City Hall, probably his best known work, in partnership with architect W. George Lutzi. I haven’t been able to determine if the partnership had been formed by 1934.

A heretofore unknown William Allen? Cool. He had mostly done Hollywood apartment buildings before this (the Marcelle, the Mayfair, the Lido) and got into small housing by the late 30s; I think the first Allen & Lutzi project was South Gate Civic Center plan in ‘42, and the Burbank City Hall around the same time of course. Then they did Rodger Young Village, and a bunch of fire stations, and medical buildings through the 50s until their modernist masterpieces like the Alhambra City Hall, civic buildings in Norwalk and Montebello, through the 60s. No idea about the theater. Even did the superior court County bldg in Compton in '78, which is a stone’s throw from the old Compton Theater.