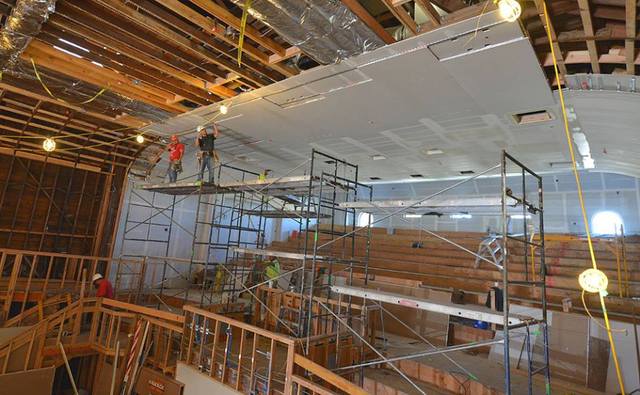 The Clark Theatre opened in 1926. By 1941, it had been renamed Vacaville Theatre. It underwent some improvements in 1952, by San Francisco based architect/designer Gale Santocono.

In the early-1960’s, this theatre was part of the West Side-Valley Theatre chain. Closed for many years, a renovation & restoration project began in 2013 and was completed in January 2014 and it became the DeVille Theatre. It was suddenly closed on September 17, 2014. It was reopened November 17, 2014 as a sports and entertainment bar.

It is looking great and am appreciative of all of the money and effort put forth in restoring it!

That’s awesome! I can’t wait to be able to photograph this one!

THIS SUCKS! As most of you know, I have been a big promoter of the new Deville Theater here in Vacaville. Suddenly, the doors closed today. I’m not going to speculate here, but I’ll be it has something to do with greedy promoters not wanting our “little” town to have such a great venue, with big name, great acts! Here’s the official press release from The Reporter.

The Theatre DeVille in downtown Vacaville has closed its doors. In a brief message through their law firm, the owners announced that the theater, at 308 Main Street, which had opened in January after a massive year-long renovation and meticulous reconstruction is canceling the remainder of its scheduled shows. “DeVille thanks all of its supporters and well-wishers that have visited the Theatre since its re-opening in January. DeVille has been committed to making the Theatre a great place for the Downtown area and all of Vacaville,” the statement reads. “While closed, DeVille will seek a new formula to make the Theatre the destination Vacaville deserves and can use while accommodating the competitive realities of the Theatre’s location between San Francisco, Sacramento and Napa.” The announcement says that anyone who has pre-purchased tickets for an event scheduled after today, “will receive a full refund.” It goes on to apologize for the “inconvenience and disappointment to its great patrons and all those who have supported it in its journey thus far” and adds that “DeVille looks forward to finding a format that works for the community and the Theatre’s neighbors while honoring the Theatre’s heritage.” DeVille officials declined comment and referred calls to their attorneys. Continue to watch TheReporter.com for updates and look for a full story in Thursday’s print and online editions.

Guess what? Rumor has it the Deville will re-open November 17th, 2014….More later…

Theatre DeVille is getting a second act — the Vacaville entertainment venue is slated to reopen Monday.

“It’s kind of low key,” said owner Jason Johnson on Wednesday. “We’re just opening it up and figuring things out.”

Johnson and his former business partner Royce Farris renovated the old Clark Theatre on Main Street and turned it into what some have called the hub, or the gem, of the downtown area. It opened with great fanfare in January and served up music and comedy and other acts and events, along with lunch.

In September, the venue abruptly closed.

In a statement released by its legal team, DeVille owners thanked its supporters and promised to “seek a new formula to make the Theatre the destination Vacaville deserves and can use while accommodating the competitive realities of the Theatre’s location between San Francisco, Sacramento and Napa.”

Johnson later told a Reporter columnist that DeVille’s reorganization was due to high overhead costs, among other things. He and his partner amicably parted ways and Johnson went full bore into planning a reopening.

On Facebook this week, DeVille announced news that had fans overjoyed.

“We are back and ready to serve you 7 days a week as a Sports and Entertainment Bar!,” read the post. “Monday, November 17th @ 11AM is the day! Come in and grab a bite to EAT and a COLD BEER!”

Reached by phone Wednesday, Johnson clarified that just the bar portion would be open right now, though more changes are on the way. The venue will be open every day from 11 a.m. to closing, which will be 2 a.m. at the latest.

“It just depends on how busy we are,” he explained.

There will definitely be music, as DeVille has always been about music, and deejays are on the agenda. There’s also a hope for Wednesday nights as Ladies Nights.

“We have a new menu, though we’ll have a slow start,” he continued. “We’re keeping the menu real simple.”

Right now, Johnson’s working on the events calendar and asks for the community’s patience in getting it going. He wants everything, he said, to be right.

“We’re basically starting from scratch,” he said. “We’ll make it fly for sure this time.”

The grand reopening event is scheduled for Nov. 26.

Back in business Vacaville Reporter POSTED: 11/17/2014 08:06:04 PM PST Ryan Chalk/) The Theatre DeVille reopened its doors Monday, serving lunch patrons for the first time since it abruptly closed in September.

Owner Jason Johnson said the quiet reopening is to allow time for “figuring things out.”

The reopening was announced on the theatre’s website with Johnson saying the venue is “back and ready to serve you 7 days a week as a Sports and Entertainment Bar!” For now, just the bar portion is open with a new menu and Johnson said he is working on the events calendar for the future.

A grand reopening event is set for Nov. 26.

Old timers say the old Clark Theater had a substantial size theater pipe organ which had been removed. They also say that an organist from the San Francisco Fox Theater often played there (Everett Nourse?) Any idea where this organ is now located or its specifications?