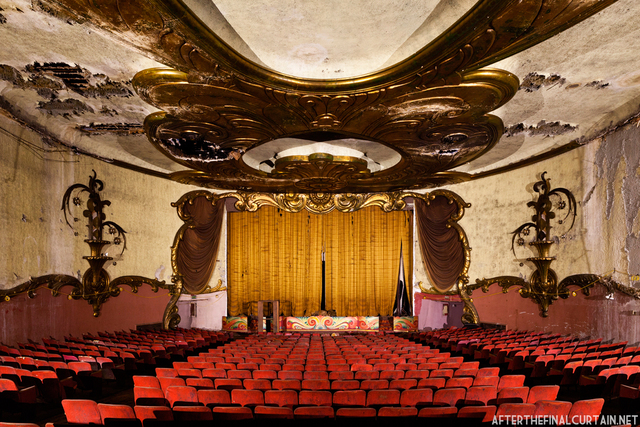 The Fox Theatre opened on March 31, 1949 – replacing the Granada Theatre which had stood on the site until it was destroyed by fire.

The Fox Theatre had a typical Skouras interior treatment which was in favor in the late-1940’s.

The Fox Theatre has stood empty and unused since it was closed by Mann Theatres in the mid-1980’s.

Don’t know whether or not this is the same photo (the date’s the same), but you don’t have to join a group to see this one:
View link

There are several signs on the boarded up front of the Fox, with old photos and quotes from supporters regarding the theatre. There’s also pictures of the Crest in Sacremento, which is much like the Fox and has been restored to its former beauty.

The group who is trying to preserve the theatre is asking those who are concerned for its future to leave a message at (310) 712-7049 stating why the theatre’s future is important to them.

Monika, those signs are by Mac Billups, a member of the Inglewood Historic Site Preservation Committee.

Thanks, Don! I will give him a call. It was my first time in Inglewood, and between the theatres and other wonderful locations to photograph I am already planning my next trip.

The Fox was approved today for national landmark status at the preservation meeting in San Diego. Congrats to everyone involved with the nomination.

Check out my mention of “A Hard Day’s Night” at the Fox in my article here: http://wp.me/p2RI2P-uWA

I visited the Fox Theatre a year and a day ago. Check out my post about the theater at After the Final Curtain

I have heard Inglewood is gearing up for a major re-gentrification. Would be nice to imagine that this could lead to the 5th Ave, The Ritz, and the Fox coming back into business, if not the Academy.