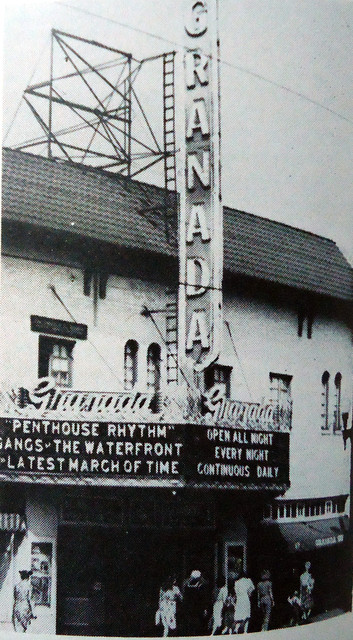 The Fox Granada Theatre opened in 1924 and was destroyed by a fire in December 1945. The remains were demolished and in 1948 the Fox Theatre was built on the site and opened March 31, 1949.

The Granada Theatre was located at 115 N. Market Street.

The Inglewood News of January 18, 1924 announced the clearance of the site where the Granada Theatre would be built. Southwest Builder & Contractor had announced in its issue of January 11 that architect Leonard L. Jones was preparing the plans. The owner was Arthur Bennett. The construction contract was awarded to General Construction Company, of Glendale, according to SwB&C’s issue of May 9 that year. I’ve been unable to find the opening date, but would surmise late 1924. The photo showing the Granada to which ken mc linked above is dated November 10, 1925.

The 1945 LA Times story about the fire mentioned that the owner was Pheoebe Bennett. She may have been Arthur’s wife.

INGLEWOOD, Calif., Dec. 18(AP)â€"A disastrous dawn fire, which burned out the Granada theatre, one of the city’s largest, a half-dozen shops and numerous offices, was controlled today after a three-hour fight by most of the city’s fire apparatus. Damage might reach several hundred thousand dollars. Cause of the blaze, which started in a malt shop, was not immediately determined. Firemen saved an adjacent Sears Roebuck & Co. retail store after a stiff battle, but said there probably would be some water damage.

Ken’s post (11/8/2008) shows the original marquee. The top photo shows the look before the fire damaged the house.