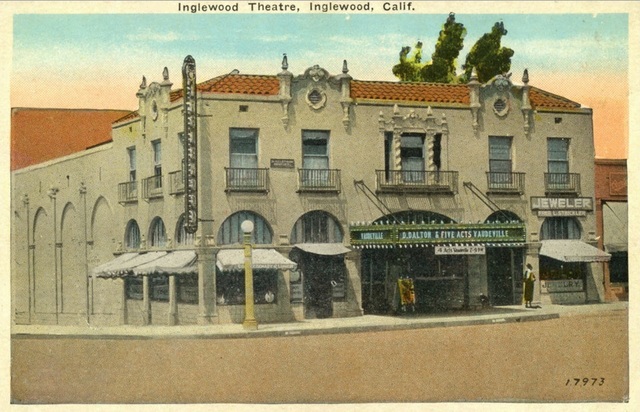 The Inglewood Theater was located on La Brea Avenue, one block West of Market Street, near the Fox and UA Theaters. It may have been a former vaudeville house.

The Inglewood had an ecclectic booking policy, showing first-run, second-run, and art films from week to week. Inside, there was a balcony that was open from time to time.

“On one occasion, I saw "The Cardinal" (a religious drama) and "Bikini Beach" - on the same program! One Sunday, I saw "Topkapi" and a drunk man sitting nearby was contributing Mystery Science Theater style dialogue; he was better than the movie.

“Other weeks, I couldn’t go to the theater because I was too young to see films like "Lord Love A Duck." (I got my dad to take me to the Olympic Drive In to see that one.)

.“The Inglewood closed over Memorial Day weekend in 1969; the last program was a Disney double feature. I remember seeing two men tearing out the poster cases from the entryway. Then, I walked over to the Ritz (it may have been remodeled into the Cine by that time) to see a biker film called "The Hellcats," but I got so down over the Inglewood’s closing that I didn’t go in.

“The building was demolished soon after to accomodate a failed redesign project for the downtown area of the city. The theater was operated by Fox West Coast, then National General. Of the six theaters in the city, the Inglewood was the first to be intentionally closed and demolished.”

This and the Ritz Theater were the two kiddie-matinee houses in downtown Inglewood in the 1950s where we would be dropped off by our parents all day and see from 4 to 6 hours of films on a Saturday afternoon. We had a great time, especially since Dad would take us to Sav-On Drugs first where we could buy five candy bars for a quarter before going into the theater. I loved my Necco wafers. Clark bars, Rocky Road, Look, and Big Hunk, all for a nickel each; but my favorites bought at the theaters were Flicks, chocolate discs in a cylinder tube with metallic wrap, and Raisinets.

The Inglewood Theatre was located at 115 N. La Brea, it seated 640 people.

From the LA Library:

The Inglewood can be seen on the right in this 1950 photo:
http://tinyurl.com/d2f3yb