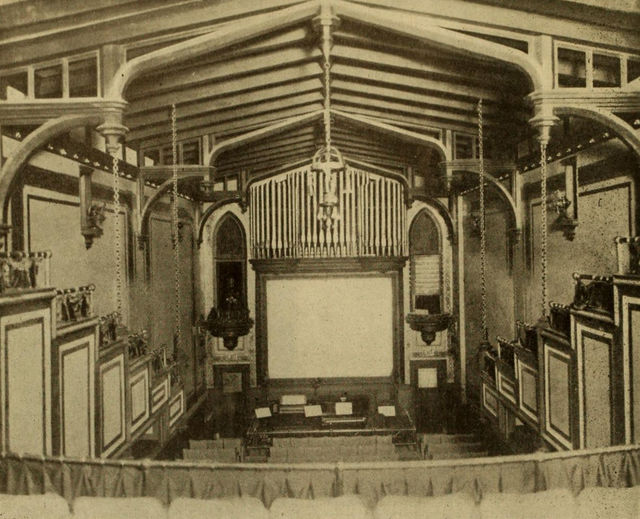 The Montgomery’s Theater was opened August 1, 1911. It was renamed Georgian Theatre in August 1915 and in December 1916 it was renamed Odeon Theatre. In the summer of 1918 it was remodeled and became the Tudor Theatre. It was closed around 1928.

Actually the Tudor is the 4th theatre to occupy that site.
It originally opened as the Montgomery Theatre on August 1, 1911.
Films such as “Queen Elizabeth” starring Sara Bernhart, and films such a Tillies Punctured Romance starring a young Charlie Chaplin.
IN August of 1915 the theatre became the Georgian Theatre, On December 17,1916 it closed and reopened on the 25th as the Odeon,
In June of 1918 the Odeon closed and was remodeled, The Tudor opened on July 4th 1918 with the film “Smashing Through” and featuring the $10,000 Unified Pipe Organ.

The Tudor remained in business until the late 1920’s when the theatre closed and became the site of the Zackery Men’s Store, which it remained until the site was cleared in the 70’s for Central City park, now known as Woodriff Park.

In that Woodruff Park is located at 51 Peachtree St NE, Atlanta, GA 30303 that should be the address of the theatre. I faintly recall the Zackery store and would love to see a photo of it.

Althought the address of Woodruff park is 51 Peachtree, construction of the park wiped out all the addresses on that side of the street starting about 35 or 37 all the way up to about 95 Peachtree.
The address of the Tudor was either 81 or 88 Peachtree (I will verify it later) which put it across the street from the FlatIron building. There is a postcard of the FlatIron Building that shows the theatre when it was the Odeon.
During the period from 1908 to 1926 there were almost a dozen theatres just along this section of Peachtree. Of which the Criterion located at 41-43 Peachtree was the largest at 900 seats. The Cameo which was located midway between the Criterion and Tudor, had the longest run.

I have uploaded to the photo section three photos of the Montgomery Theatre that were published in 1911. 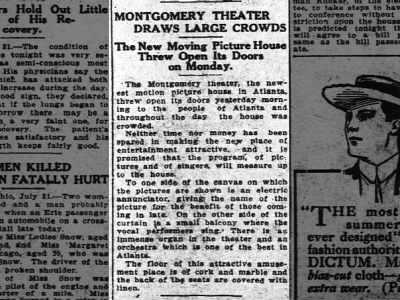 Grand opening ad in the photo section as the Tudor.