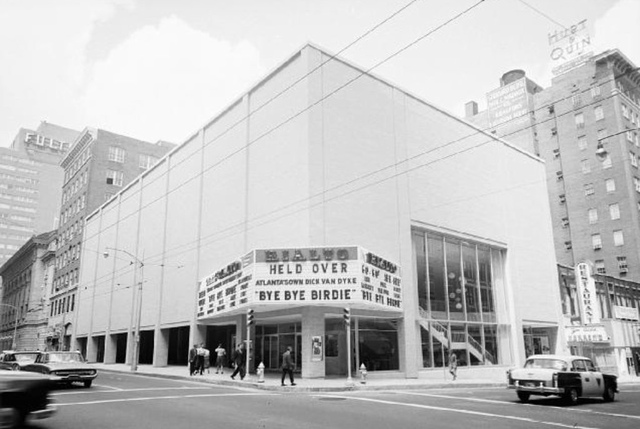 The first Rialto Theatre opened in April 1916 as the Piedmont Theatre. Designed by architect A. Ten Eyck Brown, it seated 925 and was located at 84 Forsyth Street.

In 1962, Martin razed the old Rialto Theater and built this bigger one with a seating capacity 1,200. It opened July 12, 1963 with Janet Leigh in “Bye Bye Birdie”. Georgia State University acquired the property in 1991 and did a fantastic job of converting it into one of Atlanta’s premiere concert venues.

An article in the Atlanta paper on 8/1/61 states that the Martin chain had purchased the Rialto. This would be the old Rialto which Martin soon demolished and replaced with the current building. I have always thought this was one of the best loooking theatres I have been in and almost identical to the Ziegfeld in New York City.

When I visted it years ago,it was closed,but at least i got a close up look.Looked like what Stan said a Grand Theatre for Atlanta.

In the fall of 1916, a 925-seat theater, the Southeast’s largest movie house, opened in the Central Business District and the original theater district of Atlanta. The theater’s name was the Rialto, which is defined as exchange or marketplace. The Rialto continued to operate during the Depression and at one point in its history boasted the largest electric sign above the marquee south of New York City. In 1962, the original theater was torn down and a new 1,200-seat Rialto was erected on the same site. It was the first movie theater to be constructed in downtown Atlanta in 35 years and stayed open until 1989 before falling victim to a declining downtown economy.

In 1991, Dr. Richard Koehler, then director of the School of Music at Georgia State University, was approached by real estate consultant David Haddow about relocating the School to several vacant buildings in the block bounded by Forsyth, Luckie, Fairlie and Poplar streets. As an advocate for a downtown performing arts center.

Following a very successful $14 million fund-raising campaign, led by Georgia State University president Carl V. Patton and A.W. “Bill” Dahlberg, a GSU alumnus and president of the Southern Company, construction began in the fall of 1994 on the old Rialto Theater

In March 1996, the reopening of the 833-seat Rialto Center for the Performing Arts marked a turning point in the revitalization of the historic Fairlie-Poplar District of downtown Atlanta. Since the reopening of the Rialto, more than 600,000 patrons have experienced performances ranging from theater to dance to music offerings including jazz, blues, rock, and classical. The old Rialto Theater has been successfully transformed into a first-class performance venue.

Once again thanks for the photos Alonzo.

I spent 9/64 to 12/65 in Atlanta. This theatre was fairly new and was a great place to get lost in a movie. You bought your ticket at the street level box office, went into a spacious first floor lobby area, up an escalator, down a short hallway, and you came out halfway down the auditorium. The seats in front were conventional, the back half was very close to stadium style. The total seating in 1964 was about 1200. Admission was $1.50. The movie “The Great Race” played to near-capacity here for several weeks. They usually booked light-hearted fare like that, and some Annette Funicello, Frankie Avalon, Pamela Tiffin, etc films played here.

The new action flick “Venom” ostensibly takes place in San Francisco. However, this theatre’s marquee shows up in a couple of street chase sequences. Filming was principally in SF, but Atlanta was used as well and it shows.