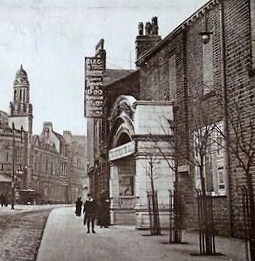 Converted from a riding school in 1911, the Electric Theatre in Halifax had 800 seats and was part of the National Electric Circuit.

It was taken over in 1928 by Denman / Gaumont and enlarged to the plans of Messrs Horsfall & Dawson to accommodate 1,100. A few years later a further and more drastic enlargement took place and the Electric Theatre now had 1,728 seats.

As one of four cinemas on the Wards End crossroads, it was the first to close, in September 1956. It became a car showroom and then a snooker club. In recent years it has had another makeover, with yet another new facade, and now houses a bowling alley and bar on the ground floor and a snooker club on the extended first floor. Internally there is little trace of its cinema past, although the entrance to the snooker hall is via the balcony vomitory and the projection suite survives as a storeroom.