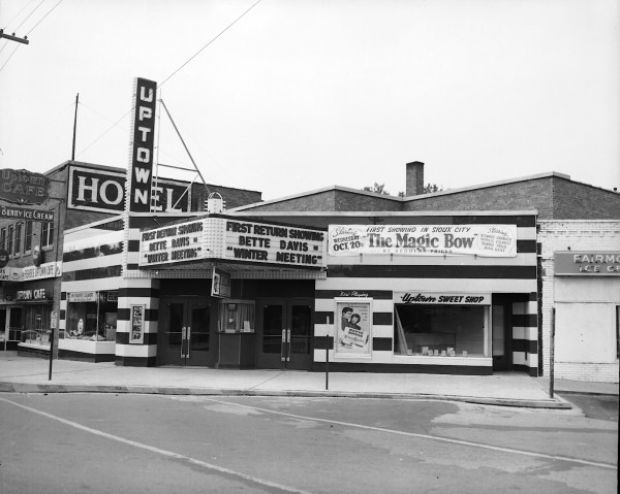 The Uptown Theatre was a neighborhood theatre that supported the northside area of Sioux City. It was a second run, usually two movies that had played in Sioux City before.

The Uptown was a clean, well-managed neighborhood theater at Pierce St. and 27th in a small business area located between two hospitals. Unlike many “nabes” of the 1950s, it had an excellent wide screen — surrounded by soft blue light, no less. Yes, programs were almost all second-run, but films were usually less than six months old. In other words, they hit the Uptown screen as fast as today’s releases show up on DVD. Movies several years old were classics such as “Shane” and “From Here to Eternity.” Prices were cheap. Students, for example, were admitted for 25 cents. Snack bar not bad. The Uptown closed soon after I left for college. That could have been why. (<:

The theatre, and the rest of the buildings attached to it and several houses, will soon be demolished to make way for a new Hy-vee Drugstore. I find this amazing since there is a large Hy-Vee store about half a mile away. Sad.

This theatre is the same as the Riviera is now in Sioux City.