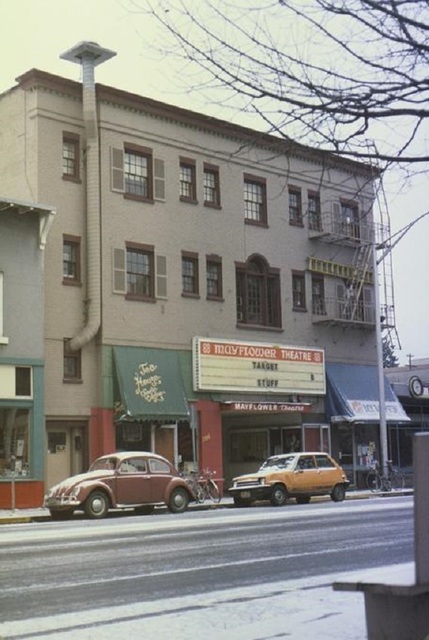 The Colonial Theatre was opened September 30, 1925. Around June 1935 it was renamed Mayflower Theatre. The single screen Mayflower Theatre was torn down in the 1980’s and a hospital clinic parking lot is now on the site. The theatre had glass windows for watching the movie while waiting in line for the single occupancy mens' and womens' restrooms located upstairs next to the projection booth.

Here is an item in Boxoffice magazine from June 1946:

EUGENE, ORE.-George Roys, one of the oldest theater operators in the Pacific Northwest, is retiring from the field after 40 years in show business. He has sold his State Theater here to West Johnson, who operates a circuit which includes the Mayflower, the Helig and the new Hawaii Theater, the latter now under construction.

The microfilms are online at View link

A December 31, 1925, Guard retrospective of that year’s construction in Eugene said that “…the new Colonial theater was erected by Laura B. Paine….” The September 30 issue of the Guard had noted that the formal opening of the Colonial Theatre would take place that night.

The PSTOS page for the Mayflower, missing some information, doesn’t mention the original name of the theater, and says that its Robert Morton organ was installed in 1922. It’s possible that the organ was moved to the Colonial from some other theater. It was removed in 1936, according to a 1990 Portland Oregonian article featured on the page.

The PSTOS text says that in 1977 the Mayflower booked the original Star Wars, which played to packed houses in its small auditorium for weeks.