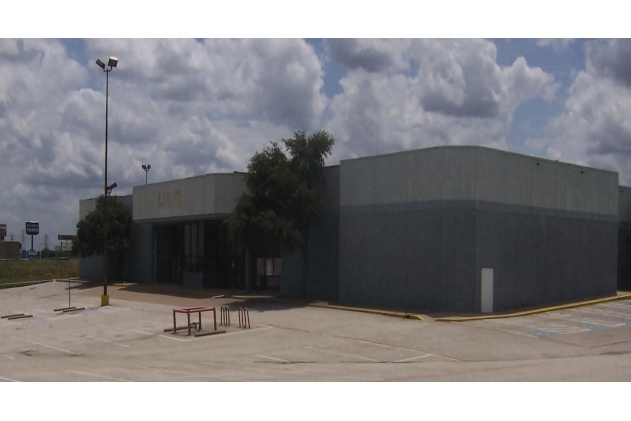 This is apparently going to be a church very soon if not already.

My very first job was working at this United Artist theater. I worked there all through High School and most of college. I haven’t been back to the area in a few years. It seems weird to see that it all shut down. When I was in High School, this was one of the two primary movie theaters for all of west Fort Worth.

The Las Vegas Trail retail area was conceived of in 1973 and opened theatreless in 1974 at Las Vegas Trail and where Interstate 30 is presently. However, in 1980, General Cinema Circuit (GCC) opened its GCC White Settlement about a mile away for people in west Fort Worth and White Settlement. United Artists decided to challenge in that zone in 1984 much as it had challenged GCC’s Redbird Mall theaters in Dallas. In fact, both the UA South 8 and Las Vegas Trail 8 were almost identical from the outside and not dissimilar from the North Star 8 in Garland and UA Bedford going up about the same time.

From an architectural point of view, the UA Las Vegas Trail, these UA cinemas were not destination theaters like Dallas' UA 150 well before it or Fort Worth’s Fossil Creek well after it but neighborhood theaters serving a specific radius. John Panzeca, vice president of United Artists Realty in charge of the company’s UA Plaza in Dallas project said of theaters such as Las Vegas Trail, Bowen, South and UA’s Northstar, “For years we built theaters that were little, rectangular boxes….I used to point with pride to how inexpensively I could get those projects to come in.”

But this theater made the circuit money and competed for clearances for top films favorably against the inferior GCC White Settlement out its outset in 1984 and for its first two years of operation. It had one 70mm screen that was THX certified and helped the circuit and theater land its biggest prize in 1984 with “Indiana Jones and the Temple of Doom.“ GCC decided to build a second theater serving west Fort Worth to blunt the competition and have improved presentation to better compete with the superior facility roughly two miles away. It opened its Ridgmar V theater patterned closely after its remodeled Town East V cinema outside of the Mesquite Shopping Mall. The Ridgmar V, Las Vegas Trail 8, and White Settlement co-existed well together.

The threat of an AMC megaplex to be built inside of Ridgmar would have employees updating their resumes for the potential fall-out. Announced in 1999, the theater was to open in 2001. But it never occurred and the Ridgmar Mall’s grand re-opening took place without an interior theater. And the competition was down a multiplex as General Cinema had shuttered the White Settlement in 1998. And on October 5, 2000, there was no more competition for the UA as General Cinema closed the Ridgmar V. This was great news all the way to December of 2003 when Ridgmar redesigned once again and, this time, got its interior theater in the form of a Rave Motion Pictures 13-screen theater. The writing was on the wall for the Las Vegas Trail 8 which became a sub-run discount dollar house and the UA decided to simply honor its full 20-year lease without a renewal and the theater was closed. Like the UA South, the theater would be converted to a non-profit house of worship.

A good friend of mine that I had worked with at UA Prestonwood became the GM here the week after “Twister” opened at the beginning of the Summer 1996. And I helped him move to Ft Worth from Dallas. And got a chance to look around the theater. I was currently working at the virtually identical UA Northstar 8 in Garland. Ft Worth had just gone through the infamous “Mayfest” hailstorm that damaged alot of homes and businesses in the area. And this theater had extensive damage as well. He had told me that when he was checked in that half of the ceiling tiles in the building were down with holes punched through the roof. The day I was there looking around all of the holes were patched and the tiles were replaced in the auditoriums. But upstairs they were still down. I saw up close the holes punched through the steel roof. They were as big as baseballs. And had been patched over with asphalt. It has been mentioned in several threads here that many DFW area UAs were identical. Such as this one, Northstar 8, South 8, Bowen 8, and Berkeley Square 8, and essentially Bedford 10. I’ve been to most of them over the years and they all had unique features and decorations to make them individualized. Compared to GCC that I had also worked for. Alot of their theaters featured their new standard design of blue, burgundy and battleship gray. And you could stand in any lobby and not tell which theater you were standing in.

This opened on April 6th, 1984. Grand opening ad in the photo section.