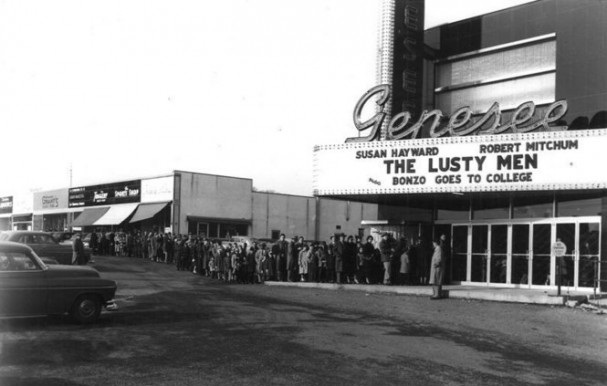 Opened on February 14, 1951, it was one of the top roadshow theatres near Syracuse. This theatre outlasted nearly all the other single screen theatres in the area. It was still operating as a sub-run budget house when the owner decided to tear it down in 1997 to build a Pep Boys store, which went out of business within six months.

Anyone have any photos of this place that aren’t already posted online?

The Genesee had a certain charm, even in the ‘80s, with that “toothpaste” decor you can see in the photos linked above. What a shame that it was lost, and for no reason.

Here is a January 1973 ad from the Syracuse Herald Journal:
http://tinyurl.com/lk9wm2

The April 1, 1950, issue of Boxoffice featured a rendering of the Genesee Theatre by its architect, Michael J. DeAngelis. One of the earliest shopping center theaters, it was built by the Albanese Brothers and operated under lease by the Kallet Theatre Corporation.

From its opening in 1950 until about 1965 the Genesee was a double feature second run venue. It only started playing first run about 1965 and then managed to get Dr. Zhinvago in February 1966 because the Shoppingtown was tied up with Sound of Music.

The biggest negative of the Genesee was its low proceenium arch and narrow stage area which resulted in a relatively small screen. As a result both the flat and scope pictures were the same size.