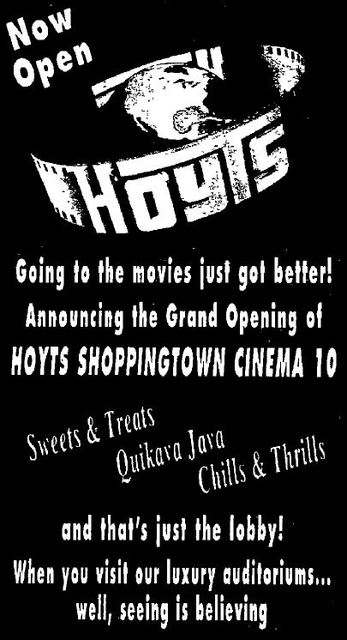 Hoyts Cinemas opened Shoppingtown Mall’s third movie theatre on October 3, 1997 in the basement of the mall. Intended to anchor a dining and entertainment section of the mall that never materialized, the complex was shoehorned into unused retail space in front of what was anchor tenant The Bon-Ton’s original basement mall entrance.

Shoppingtown Mall 10 became a Regal Cinemas thearer in 2002 as part of Regal Entertainment Group’s buyout of Hoyts Cinemas. In July 2008, an additional 4 screens were added. It was closed on March 15, 2020 due to the Covid-19 pandemic. By October 2020 it’s closure looked to be permanent.

Contributed by Brett B.
Get Movie Tickets & Showtimes

It appears that earlier today crews began the conversion of one half of the complex to stadium seating (as they are only showing 5 screens in operation). I do not have any information as to which half it was, however if it was their main side (theatres 1-5) it will be extremely difficult to get tickets here during peak times (6-10’s largest screen seats 150 at best).

The theatres 1-5 side of the complex is the side under conversion to stadium seating, because of this it appears the theatre is utilizing 119 seat theatre 7 as their main screen at this point (it has played “Cloverfield” and “Rambo” the last two weeks). Crews have also constructed a temporary concession stand/ box office while the original lobby is rebuilt to accomodate the new theatres (I imagine they would also modify the ADA issues in the original Hoyts design also).

Crews have completed work on theatres 1-5 which will reopen tomorrow (Friday May 9) with stadium seating. It appears that theatres 6-10 will remain open (with the original seating) until construction on the new wing for theatres 11-14 is completed to allow the complex enough screens for the summer season.

Showtimes posted by the theatre indicate (as they are showing bookings for fourteen screens) that theatres 11-14 will open July 2 (presumably with “Hancock”). The showtimes are through Sunday July 6th, which I would assume means they plan on having theatres 6-10 going dark the following day for their conversion to stadium seating. The new theatres have been described as “large” in Regal’s press releases, and that would make the most sense given the existing theatre’s current capacities (Theatres 11-14 the large wing, Theatres 1-5 (the original Hoyts large wing) the medium wing[120-175], and theatres 6-10 the small wing).

This theatre should now be listed with 14 screens (all mall signage has been changed to “14”; screens 11-14 opened Wednesday 7/2 with “Hancock” on 11 and 13, “Kit Kittridge” on 12, and “Kung Fu Panda” on 14). The theatre will continue to operate as “Shoppingtown Mall 10” until October, when crews will have completed converting the final five screens from the original complex to stadium seating.

My apologies… Regal put out a press release announcing the name change and the completion of the majority of the renovations about six hours after my last post (the official grand opening will be July 11). So, with the company’s correction this is now “Shoppingtown Mall Stadium 14”.

Regal has converted Theatre 12 to digital projection, in time for “Jonas Brothers: The 3D Concert Experience”. Unlike the Real-D installation as the nearby Carousel Mall Stadium 17, the 35mm projector was removed from this theatre and the digital projector installed in its place (an extra portal was installed at Carousel, which allowed their theatre to have both digital and 35mm capability).

Earlier this week Regal converted an additional three screens (theatres 1,2, and 3) to digital projection bringing the total number of digital screens at this theatre to six (1,2,3,11,12, and 14).

The Shoppingtown Mall complex has not reopened after its temporary coronavirus closure (as mall owner Moonbeam Capital has refused to invest in the New York State required HVAC upgrades that are required in order for the mall to operate). The mall has also recently declared bankruptcy in order to avoid paying an overdue property tax bill to Onondaga County, and also recently issued evection notices to all remaining inline tenants. Although it was not initially made clear if the evection notice effected the theatre, Regal has since had it removed from Fandango and its location locator. Given that information and the current condition of the mall the status of this theatre should be changed to Closed (as this closure is a business decision and not temporary). Its last day of operation was March 15, when the NY Pause order instituted the originally temporary closure.