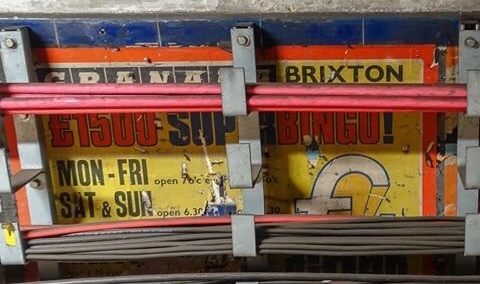 Located in the southwest London inner city district of Brixton on Brighton Terrace at the corner of Bernay’s Grove, just off the High Street. Opened on 26th December 1898 as the Empress Theatre, designed by the noted theatre architectural firm Wylson & Long. Seating was provided for 580 in the orchestra stalls, 240 in the balcony and 440 in the gallery plus seats in the pit. The stage was 60feet wide and 40feet deep. Later re-named Empress Theatre of Varieties and then Empress Music Hall.

In 1930 it was taken over by Variety Theatres Consolidated. In 1931 it was re-constructed adding another 500-seats and designed in an Art Deco style by architect Andrew Mather and re-opened in September 1931, still a live theatre it was re-named the New Empress Theatre. Films were first shown in the 1930’s on Sundays only (this was a day that live performances were not licenced).

Granada Theatres took an interest in the operation of the Empress Theatre from June 1951 and they managed the theatre from 1955. Max Miller played the last music hall/variety bill at the theatre and it closed as a live theatre on 12th January 1957 after a run of the pantomime “Aladdin” starring Alma Cogan.

After alterations by cinema architect David E. Nye assisted by interior designer F. Mudd, it re-opened as a full time cinema from 5th February 1957 with Charlton Heston in “Three Violent People” & John Bentley in “Escape in the Sun”. Attending the opening ceremony was film star Forrest Tucker & the celebrity Sabrina who was famous for her large breasts.

Occasional live shows were staged when in January 1964 Joe Brown starred in the pantomime “Aladdin” and in December 1964 Richard Hearne starred in “Puss in Boots”. A two week run of ‘Old Time Music Hall played in March 1964 and there was a one night stand of the pop concert “The James Brown Show”. Wrestling was staged on Saturday evenings around this time and proved popular.

The Granada Theatre closed on 10th February 1967 with Gregory Peck in “The Guns of Naverone” and became a Granada Bingo Club. This operated for many years, but was eventually closed and was temporary used as a furniture store. The building was demolished in November 1992. Housing named Pavilion Mansions was built on the site.

I remember visiting this theatre as a child as a christmas treat the screen was at quite an angle when you sat in the front stalls, I remember getting a crick in my neck watching the film, which I think was a revival of Disney`s “Dumbo”. It seemed to be a huge place, the circle and upper galleries I do not think were being used. When I visited in the late 1980,s shortly before the thetre closed, I was able to look around from top to bottom including all the former backstage areas, the upper galleries had a 3 inch layer of dust on them!!

Exterior photo of the Granada here:–