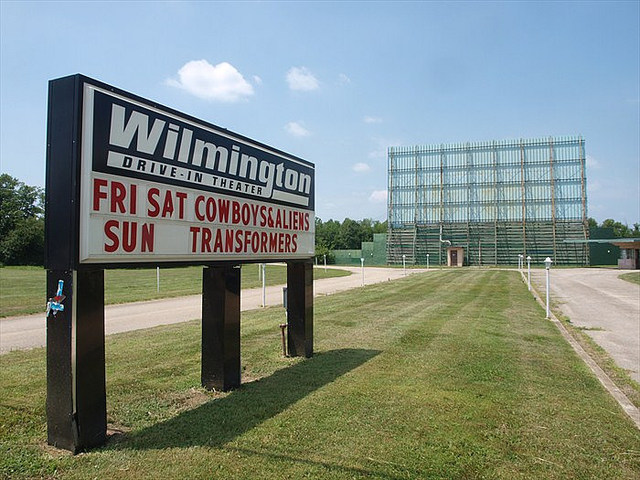 The Northside Drive-In was opened on June 8, 1948 with Betty Grable in “The Shocking Miss Pilgrim”. Around 1951 it was renamed Wilmington Drive-In and was operated by by Chakeres Theaters Inc. It was closed as the end of the 2015 season.

Sadly, this is now closed per Chakeres.

This drive-in reopened for the summer of 2013. Its status for the future is up in the air, as Chakeres has sold the Wilmington 5-plex.

This drive-in is still listed on the Chakeres website but closed for the season.

The Northside Drive-In Theatre opened June 8, 1948 with spaces for 600 cars and open-air seating for another 200 patrons. The first film was “The Shocking Miss Pilgrim.” Jack Jossey and Kroger Babb were among the original operators of the Triangle Drive-In Theatres Company that launched the ozoner with Gene Lacey as season one manager. Its 42' by 31' screen was within the 48' by 48' tower.

The theater had six managers in just its first four seasons. But Queen, the pony, providing free pony rides and Playland installed at the base of the drive-in in opening the fifth season proved to be a winner with kids and families, alike. The theatre had live western star appearances, WLW hosted its Midwestern Hayride TV show once, dish night, fashion night, TV demonstration night, sunrise Easter services, and on it went as the theatre connected with the local audience. A turn to porno chic in the mid 1970s was met with resistance and the theatre turned back to family fare.

Chakeres would run the operation for more than 60 years to its digital conversion as the veteran theatre was still active in the mid-2010s. A truly amazing run for Ohio.

Status should be changed to Closed. It, along with the Skyborn in Fairborn and the Melody Cruise-In in Springfield did NOT open for the 2016 season, and are currently not opening in 2017.

wont be opening anytime soon. the ticket booth windows are boarded up most likely because vandals have already struck! i saw it in a you tube video but i can’t find the video. let’s hope that it either says open or closed but not closed and demolished!

Yes This Is The Formerly The Northside Drive-In Opened On June 8th, 1948.