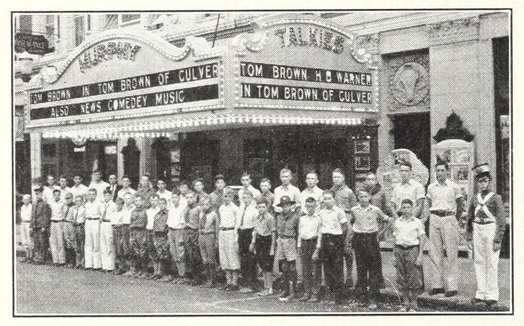 The theatre is alive and well and still doing performing arts!

The surname of one of the partners in the architectural firm is currently misspelled. The correct spelling is Fahnestock. The firm of Dittoe, Fahnestock & Ferber was in operation from the late 1910s to the early 1920s. The partners were Louis G. Dittoe, L.W. Fahnestock, and Charles H. Ferber, Jr.

Although Dittoe appears to have been the senior architect in the firm, it is possible that Ferber brought some expertise to the Murphy Theatre project. According to his biography at the Architecture Foundation of Cincinnati, he had spent parts of the years 1913 and 1914 training in the office of noted San Francisco theater architects James and Merritt Reid. From 1909 to 1913 he had received training in the office of Rapp, Zettel & Rapp, a Cincinnati firm that designed a number of theaters.

The November, 1919, issue of The Western Architect featured five photos of this splendid theater (scan at Google Books.)

Just saw the 1993 movie Lost in Yonkers on TV. Façade of the theater used prominently. For interior photos go to location shots for Lost in Yonkers. There are a couple of them.

Is the Murphy Theatre showing Motion Pictures, all I can find is live performances.

I happened to run across this 2015 re-cap of the 1930 film “The Widow From Chicago”. At the bottom there is a print ad for the film at the Murphy Theatre from the November 25, 1930 Wilmington Daily News-Journal.

The late actor,John Ritter of Three’s Company was married to his second wife at the Murphy.

The Wikipedia page for the Murphy Theatre has multiple photos including vintage interior images. 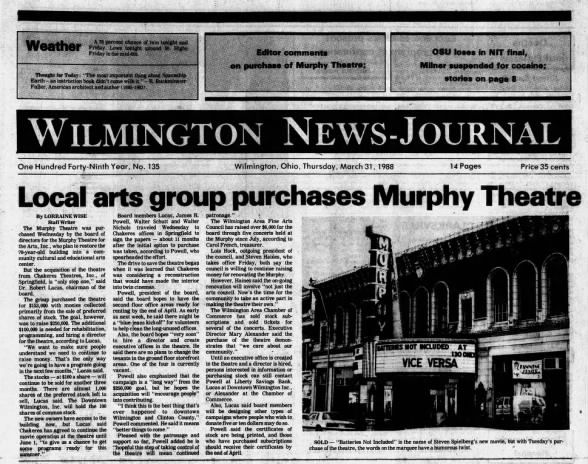 A history of Clinton County published in 1915 notes two movie theaters at Wilmington: The La Max, owned by Lacy and McCoy, and the Cub, owned by Frank Murphy. These were also the two houses listed in the 1914-1915 American Motion Picture Directory. The Cub was located on West Main Street. Numerous mentions of the Murphy Theatre in trade publications of the 1920s refer to Frank Murphy as the manager of the house. As the 1988 article about the closing refers to “…the 70-year-old building….” it seems likely that the Murphy was the replacement for Mr. Murphy’s Cub Theatre, perhaps built on the same site. The earliest announcement I’ve found of Murphy’s intention to build a new theater appeared in Moving Picture World of May 6, 1916.