Opened on March 1, 1939 in a conversion of an existing building. The opening movie was Ronald Colman in “Lost Horizon”. Seating was proved for 700, with 530-seats on the main floor and 170-seats in loges in the mezzanine. A photograph of Chico’s W. 2nd Street taken ca.1940 reveals that the Empire Theatre was located almost directly opposite the El Rey Theatre (then known as the American Theatre), which still exists. The Empire Theatre building appeared to be fairly old at that time and was closed on March 1, 1941 as part of the T & D Jr. Enterprises chain. It was used a church and for special events, but was demolished by the late-1950’s.

The Empire was apparently closed when this 1940 photograph was taken. The marquee reads “Always a Good Show, American and Senator Theatres”, and there’s a lot of stuff piled on the sidewalk in front of the theatre. A renovation, perhaps, or maybe evidence that the Empire had been closed for good and the space was being converted to some other use?

A few years after this photo was taken, the larger and fancier American Theatre across the street from the Empire would be gutted by a fire and then rebuilt, minus its upper floor and classical architecture, and be renamed the El Rey, the name it retains today as an occasional live performance venue.

According to a card in the California Index, an item on page 114 of Architect & Engineer, September 1926, mentions a theatre in Chico designed for the Valley Empire Theatres Company by Sacramento architects Starks & Flanders. I wonder if this could refer to the Empire? In the 1940 photo linked above, the building looks too old fashioned to have been built as late as 1926, but the card doesn’t indicate that the house was newly built at that time. If anybody has access to a copy of that issue of A&E, please check it and see what it says.

The Empire closed March 1, 1941 although hosted church and other live events in 1942. The Chico signage, seating and projection were moved to Oroville in 1945 when the T&D Jr. Circuit decided to open a second theatre there. 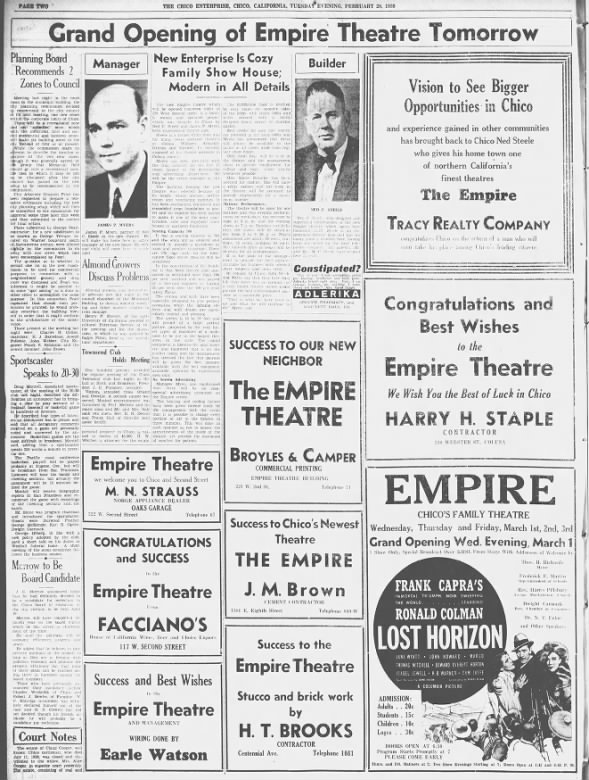