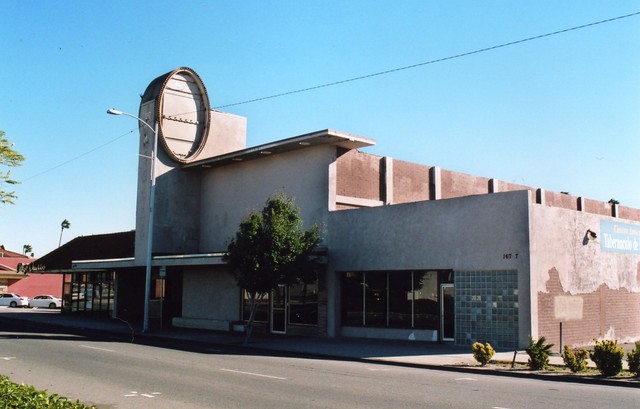 The Arrow Theatre opened around January 30, 1949 with 800 seats showing first run movies. In 1970, it went over to screening adult movies as a Pussycat Theatre, which lasted until 1974. In 1983 it briefly became the Del Mar Family Theatre which closed around 1986.

After its life as a theatre, it had a long history as a church as Lighthouse Ministry Community Church and Tabernaculo de Restauracion and it was vacant by late-2007 when it was donated to Fontana Film Society and is currently being resurrected again as a theatre for live music and independent/foreign films.

Boxoffice announced the construction of this theater, as yet unnamed, in its issue of May 8, 1948. The owner of the project was J.H. Harris, and the house was to be operated under lease by Bob Smith. The theater was designed by San Bernardino architect Howard E. Jones.

Kenneth,I lived in Fontana from July 1983 to January 2006,though i briefly lived in San Bernardino from March 1994 to January 2001,and your info is wrong about its time as The Delmar. I went there regularly until they switched to Spanish films in around 1985-6,then it became a church until they closed it. Not sure what they’re doing with the building now.

Sir, this theater was originally the Arrow Theatre originally but became the Del Mar Theatre, a second run house in 1983 until about 1986-87. Thanks.

It closed as a Pussycat in 1974(The Los Angeles Times and San Bernardino Sun newspapers can prove this)as a result of pressure from the neighbors. It operated under various names before closing as the Delmar in the late ‘80s after switching to Spanish films for a short time.

Shortly after it closed as a Pussycat theatre,it became known as The Fontana Family Theatre until sometime in 1983.