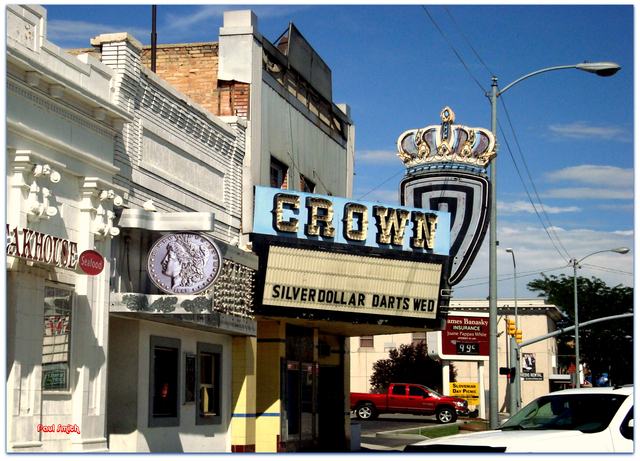 That’s one of the better ones I’ve seen.

Here is an item from Boxoffice magazine, May 1950:

The Crown Theater at Price, formerly the Utah, is expected to open May 25 under the direction of the Salvarakis Brothers, who are understood to have Irving Gillman of United Intermountain Theaters as director of operations.

utahtheatres.info says that the Crown Theatre opened as the Eko Theatre on December 18, 1912 (though another line on the page says the house “…brought silent motion pictures to Price in 1911….) It was renamed the Lyric Theatre in 1914. No date is given for the renaming to Utah Theatre.

Great photo of the Crown in Price Utah.

I believe my family collectively owned this theater until the early 1970s. I keep teasing my wife that we really should move back to Price and run it. :)

The Lyric must have become the Utah in 1938. This brief item is from the “Theater Changes” section of The Film Daily of October 7, 1938:

“Price — Utah (formerly Lyric); Work Planned: New marquee, ventilating system, etc.; Owner: Nick Salevurakis.”Nick Salevurakis owned the Lyric in the 1920s, but sold it around the end of 1926 and must have bought it back later. This item is from the January 4, 1927, issue of Exhibtors Daily Review:

“The Star and Lyric Theatres of Price, Utah, have been purchased by Mr. Littlejohn, the Lyric having been owned by Nick Salevurakis and the Star by Georgeites Bros.”

At the end of the 1930s the Utah became part of the Huish circuit, as noted in this item from Boxoffice January 6, 1940:

I’ve been unable to find anything in the trade journals about the theaters in Price after 1940, until an item in the July 7, 1975, issue of Boxoffice said that as of July 1, the Price and Crown Theatres and the Motor Vu Drive-In had been owned and operated by Stan Dewsnup and Wesley Webb.

The Eko Theatre launched December 18, 1912, A March 5, 1925 ad announces a naming contest for the theater as the Eko underwent a refurbishing. The venue relaunched as the Lyric Theatre on March 29, 1925 showing “The Devil’s Cargo,”

New operators took on the location renaming it as the Utah Theatre on September 17, 1938 with Joe E. Brown in “The Gladiator.” The Utah nameplate was discontinued in February of 1949:with bids accepted to refurbish the theatre once again. In 1950, it relaunched as the Crown Theatre. It remained the Crown until closing in 2009.