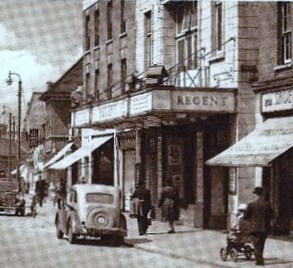 The Regent Theatre was opened on 4th December 1926 with a production of Fay Compton’s "London Love". It was built for and operated by the independent South Coast theatres circuit. It was a quality theatre and was equipped with 20 feet wide proscenium opening, a fully equipped stage which was 25 feet deep and seven dressing rooms. The facade was in a classical style and was faced with white Carter’s Architectural Tiles manufactured by Carter’s Tiles of Poole. The name ‘Regent Theatre’ was across the top of the building in neon, and lower down the name was repeated in the tiles. Seating was provided in stalls and circle.

Initially it was used for revues, plays and some films. When ‘talkies’ arrived it went over screening films almost full time and became the Regent Cinema. A new Christie theatre organ was installed in 1931 and it was especially built to the specifications of leading organist Alex Taylor. The theatre closed whilst the installation was taking place and it re-opened on 4th July 1931 with Sydney Howard in "Tilly of Bloomsbury" on the screen and Jack Taylor opening the Christie organ.

The Regent Cinema was always independently operated and closed after an uneventful life on 1st June 1968 with Spencer Tracey in "Guess Who’s Coming to Dinner". It was converted into an independent Regent Bingo Club and this continued until 1977 when closure came and the building was demolished.

The Dolphin Centre, was incorporated onto the site and is now occupied by Tesco’s supermarket and Littlewood’s store.

Scroll to page 16 for a vintage photo of an auditorium with a curtain with a nice geometric style pattern. The curtain and the auditorium look like they could be in the Art Deco style:
View link