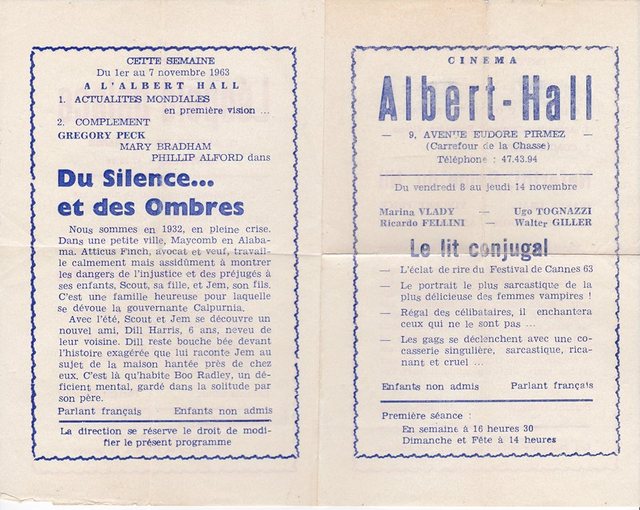 Located in the Etterbeck district of Brussels on Avenue Eudore Pirmez (known today as Eudore Pirmezlaan). This was the second Albert Hall Cinema, replacing an earlier/smaller Albert Hall Cinema across the road junction on Avenue de la Chausse. It had its entrance through a tenement block of flats. Around the corner (and part of the same building) is the Roseland Ballroom, which has a restained Art Deco facade with Egyptian capitals at the top, where also there is the name ‘Roseland’ set into the stonework. The building opened as a dual-use venue (‘salle des fetes and cinema) in 1932, designed by architect Arthur Meuleman.

The Roseland Ballroom is located in the basement (possibly named after the famed ‘Roseland Ballroom’ in Manhattan, New York City) and an Art Deco style cinema on the ground level. Seating in the cinema (known as the Albert Hall) was for 1,148 in stalls and circle levels.

The cinema closed in 1965 and was empty and unused when the Cinema Theatre Association(UK) visited the building on their tour of Brussels cinemas & theatres in September 1995. All seating and equipement had been removed.

The Roseland Ballroom was still in operation and still operates today and the cinema has now been restored and is used for conferences.

remark : known today as Eudore Pirmezlaan : this is Dutch version, in French it is Avenue Eudore Pirmez, so both are valid.