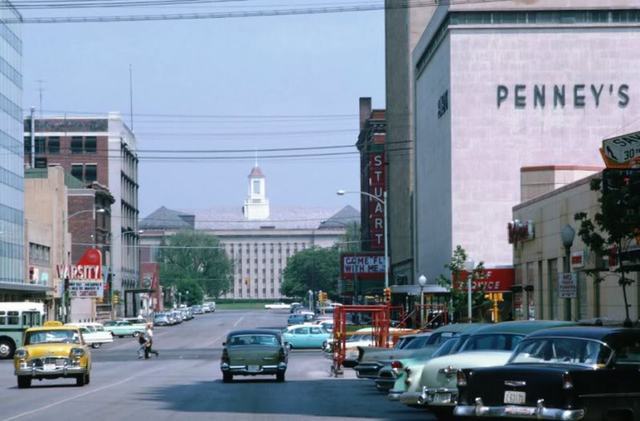 Located at the corner of N. 13th Street and P Street. The Lancing Theatre was opened on November 23, 1891. It was designed by E.C. Horne in a Romanesque Revival style, with an interior in a Louis XV style. It was renamed Oliver Theatre in 1889 and operated as an opera house. During World War I it was renamed Liberty Theatre. In 1941 it was renamed New Varsity Theatre after the former Bijou/Orpheum/Majestic/Rialto/Varsity (which has its own page on Cinema Treasures) was closed.

On September 11, 1971, Walt Jancke, built the Cinemas 1 & 2 a block away. In 1973, the Varsity Theatre was demolished to make room for the National Bank of Commerce.

Corrections: The first Varsity Theater (there were 2) opened in 1934 on the site of the old Rialto (1500 O Street). That theater closed in 1941, and the Varsity name went to 13th & P Streets, the location of the old Liberty Theater, which, in turn, replaced the Oliver (not Olivier) in 1924. The Oliver opened in 1889 as an opera house. Walt Jancke did not own the Varsity; he was city manager for Westland Theaters (owned by Larry Starsmore), based in Colorado Springs. They also owned the State Theater in Lincoln. When National Bank of Commerce bought the Varsity site, Westland built the Cinema Twin, Lincoln’s first “multiplex”.

I just found this Lincoln Journal-Star article about the second Varsity. It opened on November 23, 1891 as the Lansing Theatre, became the Oliver in 1899, was renamed the Liberty during WWI, and the New Varsity in 1941, after extensive alterations.

Correction to my previous comment: The extensive alterations to the second Varsity took place some years after it had been renamed. We have photos of it before the remodeling on the photo page. The photo page has pictures of both the first and second Varsity on it, so it’s a hybrid, just like the description page.

One possible error remains on this page, probably derived from the one item on the photo page noting Davis & Wilson as the architects. That is the 1934 grand opening ad for the first Varsity Theatre on O Street. While it’s possible that Davis & Wilson did draw the plans for the radical post-war remodeling of the second Varsity (they definitely designed the remodeling of the Stuart Theatre across the street in 1941,) I haven’t found any sources confirming their involvement in the second Varsity project.