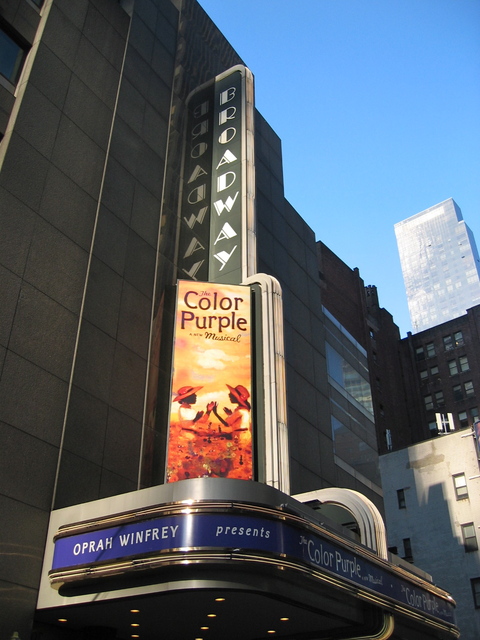 Opened as the B.S. Moss' Colony Theatre on December 25, 1924, with “The Thief of Baghdad” starring Douglas Fairbanks and accompanied by an orchestra conducted by Edwin Franko Goldman. B.S. Moss Enterprises built the theatre for movies, and with stage facilities for vaudeville. Architect Eugene DeRosa designed the Colony Theatre. It was taken over by Universal Pictures chain in 1927. Because of its size, stage presentations were smaller than at the Paramount Theatre(1926) and Roxy Theatre(1927), but continued until December 1930 when it was taken back by B.S. Moss Enterprises. In that month, Moss changed the Colony Theatre’s name to Broadway Theatre and turned the theatre ‘legitimate’. The first booking was a musical comedy, “The New Yorkers” starring Jimmy Durante and with a score by Cole Porter, but it only ran for twenty weeks.

The Shubert Organisation restored the Broadway Theatre in 1985-86, employing the architectural firm of Fox & Fowle. Little of the interior existed when they started. The Broadway Theatre reopened April 10, 1986 with Bob Fosse’s “Big Deal” which was a flop, but the following year struck gold with “Les Miserables”, followed by “Miss Saigon”. Several years ago, the Broadway Theatre received a new entrance and marquee, due to construction of an adjacent skyscraper hotel that cantelevers over it. Tucked away from the razzle dazzle of Times Square, the Broadway Theatre’s Art Deco style sign hints at its glory days.

Does anyone know the size of the screen installed at the Broadway for the premiere of “This Is Cinerama”?

Incredible December 1928 photo as the Colony added courtesy of the Eyes Of A Generation.com Facebook page.

Hammerstein Theatre, now the Ed Sullivan Theatre in the background. Below copy/history of the Hammerstein also courtesy of the Eyes Of A Generation.com Facebook page.

Tomorrow is David Letterman’s last day in this grand theater that was built in 1927. This photo shows “Good Boy” playing at what was then The Hammerstein Theater in December of 1928. The famous song at this link was first performed here and was the first “hit” event in the theater’s history. https://youtu.be/rI275t9BNJo?t=42s

The song is “I Want To Be Loved By You.” and is sung by Helen Kane, who’s voice and style was the inspiration for the famous cartoon character Betty Boop. In 1931, bankruptcy forced the sale, and the theater was bought by Billy Rose. After a few more years of legitimate theater ventures, Rose entered a long term lease with CBS in 1936. The debut radio show from here was “The Major Bowes Amateur Hour,” and the venue was known as CBS Radio Playhouse.

In 1950, the theater was converted to television and became CBS Studio 50. The first big production from Studio 50 was “The Jackie Gleason Show” in the fall of 1950. In ‘52, Ed Sullivan’s “Toast Of The Town” show was moved from The Maxine Elliot Theater to Studio 50, and joined Gleason there. Tomorrow night, another chapter ends, and a new one will begin again soon at 1697 Broadway.

Walt Disney’s “Fantasia” premiered here on this date in 1940. Happy 75th! And here’s a retrospective article to mark the occasion. Included is a historian interview and a breakdown of where the film played in its initial roadshow release.

More info here – http://incinerama.com/ctbroadway.htm when it was a Cinerama theatre.

As cited in my retrospective article, the Broadway Theatre held the longest-running roadshow engagement of Disney’s “Fantasia” and was among only eleven venues that presented the film in Fantasound.

My parents may have taken me to see Fantasia as a child. We went to a lot of movies in the city. Finally got to see it many years later on the CinemaScope screen of my local theater.

Circa 1963 photo added courtesy of Neil Marsolek‎. “The Girl Who Came To Supper” premiered on stage at the Broadway Theatre December 8th, 1963.

CC I’m not sure if you are reproaching Zornig or just repeating what he already said.

vindanpar, CC’s above comment has been removed, but it is still present under the photo. I stated above that it was “on stage”, but did not do so on the photo description. The notification is what alerted members to the addition of the photo, so it is moot.

Ok I was just trying to figure out the point of CC’s post.