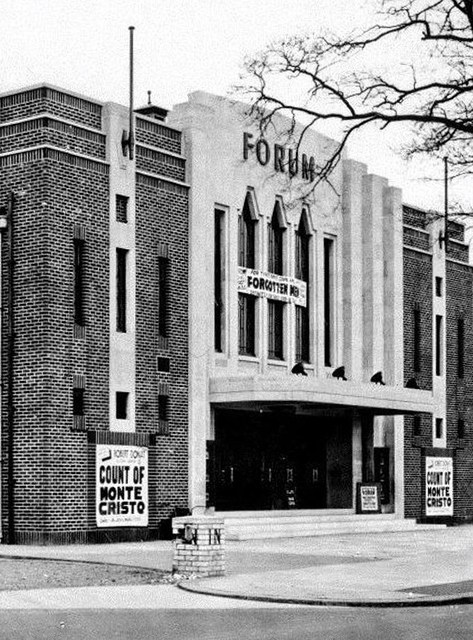 Located in Northenden, Cheshire on the borders with Wythenshawe, which today is part of Greater Manchester. The Forum Cinema is on the corner of Palatine Road and Longly Lane. It was opened on 22nd November 1934, and was a project of the independent Forum Cinema Company.

The building is designed in a stylish ‘Jazz Modern’ Art Deco style and has seating in stalls and circle. It was equipped with a Wurlitzer 3Manual/8Rank theatre organ which was opened by organist Kevin Buckley. The Wurlitzer had originally been installed in the Cameo Theatre, Cleveland, Ohio, USA. It also had a fully equipped stage and large stage house and dressing rooms, which in the early years hosted an annual pantomime. There was also a ballroom and a cafe for the convenience of its patrons.

From 15th April 1936 the Forum was taken over by Associated British Cinemas(ABC) and they operated it for the remainder of its cinematic life. It was re-named ABC in February 1964 and was advertised as the ABC Wythenshawe. The ABC closed on 23rd February 1974 with Bruce Lee in “Fist of Fury”.

The building was used for several years as a live theatre, known as the Forum Theatre. It was taken over and became an Assembly Hall for the Jehovah’s Witnesses. The Forum Cinema is a Grade II Listed building.

Vintage photographs of the Forum Cinema, and the Wurlitzer organ console:
http://www.ukwurlitzer.co.cc/page8.html

If I`ve got the right one this is where part of the film “Brief Encounter” was made and you see Trevor Howard and Celia Johnson sitting in the circle and Irene Handl “playing” the Wurlitzer organ.

It certainly had a Wurlitzer organ. I was assistant/relief manager here in 1969. When I see Brief Encounter again I shall see if I recognise the site.

The scene set in a cinema with organ playing, in the film “Brief Encounter”, was filmed on location at the Metropole Cinema, Victoria, London (now demolished)

I have just remembered, the cinema in question was the Forum and whilst I can`t say for definite that this was the one used in the film I do know that the console design of the organ was the same. Can anyone enlarge on this?

Odeonesque, as Ken rightly says ,this was not the venue used for Brief Encounter.It was the Metropole Victoria but the two Wurlitzer organ consoles were very similar.Other consoles similar were at Granada Edmonton,Troxy Stepney and of course the Tower,Opera House and Empress ballroom in Blackpool.

Went past this recently in my car. Had to ask a friend to remember it’s location. Looked stunning from the outside.