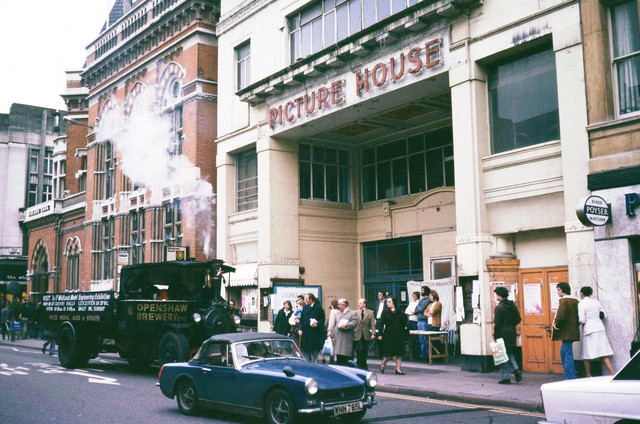 The Picture House was built for and operated by Provincial Cinematograph Theatres(PCT) and opened on 22nd December 1910. It had its main entrance on Granby Street and also had an imposing facade located at the rear at Every Street on Town Hall Square, which served as the front stalls entrance. It was designed by the architectural firm Naylor & Sale and had a seating capacity of 600.

It closed on 5th May 1925 for refurbishment and rebuilding. The facade and front section of the building on Granby Street was demolished and a new entrance created. The auditorium was ‘reversed’ so that entry was now from behind the screen. A circle was added, entry to which was via slips on each side of the 40 feet wide proscenium, again with patrons entering having to ‘walk away’ from the screen to reach their seats. The renovation and re-building was carried out to the designs of architect H. Rigg.

There was now a spacious entry foyer and also a large restaurant above it on Granby Street. Decoration in the auditorium was Classical, with swags of plaster flowers on the front of the balcony and a barrel vaulted ceiling. Seating was now provided for 1,626 in stalls and circle. It re-opened on 3rd August 1925. In early 1926, a Wurlitzer 2Manual/8Rank theatre organ was installed and it was opened by organist Jack Courtney.

In February 1929, PCT were taken over by Gaumont British Theatres. The Wurlitzer organ was removed in 1938, to be installed in the Exchange Cinema, Northampton.

The Picture House continued to be a popular city centre cinema for many years, and eventually passed over to the ownership of the Rank Organisation. In the 1960’s, Rank were operating 3 cinemas in the city centre; the huge 2,000+ seat Odeon, the former City Cinema which they had redeveloped as a roadshow cinema known as the Odeon Market Place, and the Picture House.

The Picture House was deemed surplus to requirements at the time, and closed on 9th June 1973. The restaurant had been open until almost the end. The cinema was a magnificent example of a 1920’s luxury cinema, and was well maintained. Even original ‘gas’ secondary lighting was still in use.

The building stood empty and boarded up for over seven years until it was sold for re-development. Sadly, it was demolished in January 1981, apart from the original rear end and facade on Every Street/Town Hall Square, which was converted to offices. On Granby Street a new building was built which originally housed a travel agent and a pizza restaurant, but is vacant in 2017.

The reason the Every Street/Town Hall Square facade was retained is that it is designated a Grade II Listed building. Heritage England de-listed the facade in December 2019.

I saw several films here as a boy.A very smart cinema with those attractive pillars outside. It was an unusual place as you entered right near the screen, but fond memories of going there.

I visited this place fairly frequently in the early to mid-60’s. It was a very strange cinema due to its “back-to-front” construction. Unfortunately, the screen was severely limited by the width of the building and in Cinemascope days it was like watching the film through a letter box as the top and bottom masking had to be cranked in so much – not a very enjoyable experience. In the left hand wall could still be seen the pierced ornamental grille of the single organ chamber with a matching pattern painted on to the right hand wall. On the teaser above the screen was the old Gaumont British logo, the letters GB in rather “spiky” capitals surrounded by crysanthemum petals (although those who know better inform me that it was a marguerite!)

I visited the box in the 60s. I remember the chief was a very nice lady called, I think, Florence Barton. The throw was very long and (again if my memory is correct) the backing lenses for ‘scope were 9". As a previous correspondent has said, the proscenium was so narrow they had to halve the height for scope. The chief said it was such a popular cinema that you could run a roll of tickets through the projector and still take money.