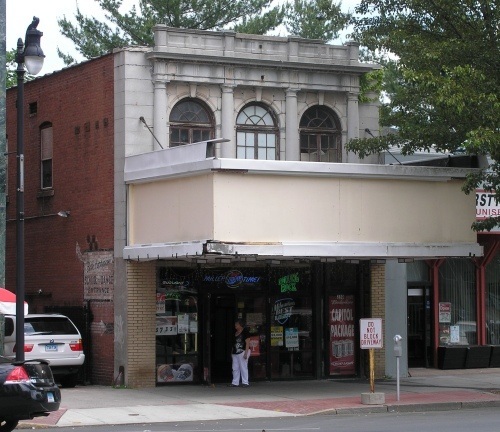 The Capitol Theatre was open by 1950 when it was operated by Liggett-Florin Booking Service. It has been closed for years and is currently a liquor store. The marquee remains intact, but is growing increasingly dilapidated.

Is the theatre intact at all behind the store?

The auditorium remains, but is stripped of all seats and ornementation. When I snuck in one day I fell through the rotted wooden stage floor.

I’ve seen the pics on Cinema Tour and they are not pretty. It’s sad that it’s a liquor store and I know the people are just trying to make an honest buck, but they should take better care of that poor building.

I have all the info on this theatre as I talked to the owner extensively yesterday.

The marquee is still there but it’s whitewashed. Inside towards the back there’s a lot of water damage. There’s been a drop ceiling in place but only for ¾ of the lobby, after that it’s a higher ceiling (maybe 5 feet) and lots of rotting wood that they are getting fixed, but you can see the original ceiling. Original 1950s movie poster of Humphrey Bogart are still in the original poster holders.

Roger Katz of CinemaTour has pics from 2002 but the owner doesn’t remember giving a tour then, only in 1993 to some cinema buffs from Wesleyan and he opened and bought the place in 1991. He spoke straightforward and against dirty politics, of which he feels and knows he’s received over the years.

He said shortly after he bought it, Wesleyan wanted to build a performing arts center and the Capitol he agreed would be perfect as everything was still intact, seats, etc. They told him they wanted him to buy it, which he had done (I guess he rented it then bought it) and they said they would buy it from him and net him more money which never happened and he’s quite bitter about it. They built one for many millions on the north side of town. He’s convinced that if the infrastructure’s already in place then it would be less money to for a conversion.

Then the Goodspeed Opera House (in East Haddam, just over the river and south) was interested and the City of Middletown said they wanted to buy it and then sell it to the opera folks, which never happened.

He told me had an engineer come in a while back to check for structural damage and even though the place was looted years back for seats and other things, the building is built from extremely strong steel, not supposed to be used for theaters, let’s put it that way. He said there’s a lot of water damage but it’s a little dangerous.

One good thing, the projectors are still there and he wants to sell them. I gave him this website and told him to post it. Very nice guy.

The Capitol and the Palace appear almost side-by-side in this photo in Boxoffice magazine from May 28, 1955. Each house was playing a different Davy Crockett film.
View link

Loved the Capitol and Palace theaters back in the day. I grew up on Pearl Street in the North end and remember those Saturday afternoons at the movies, for 35 cents you could watch two. I also remember the Battle of the Bands that they had in the mid 60’s and played there myself in a band called The Dark Side, we were billed as Middletowns only folk rock band, did alot of Dylan and the Byrds. I believe the owner was Nick Saraceno at the time. AAH the Good Old Days. Phil522

Things have gone from bad to worse for the Capitol. The City of Middletown has declared it unsafe and is having it demolished. It has deteriorated due to a long-leaking roof. Too bad no one could just keep it dry. Middletown is an artsy town with nice restaurants on its main street and Wesleyan University and could probably support an arts house, botique theater. Well, looks like that won’t happen.

Wesleyan itself has (or used to have) a state-of-the-art facility. Do they offer any programs for the general public? I’m thinking of what Clark University in Worcester and Trinity in Hartford (with its fantastic Cinestudio) do, each open to the general public.