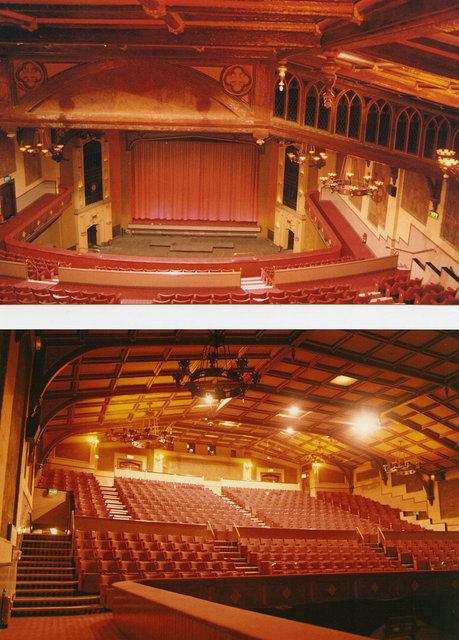 The Gaumont Palace Cinema opened on 7th September 1931 with Ralph Lynn in “Chance of a Night Time”. It was a project of the Albany Ward Circuit, a division of Gaumont British Theatres. This is possibly one of the most unique historic cinema buildings in the United Kingdom, perhaps the World!

The facade and outer foyer is actually a Grade I Listed building, built as Ye Halle of John Halle, a Tudor Gothic style building which was originally built as the home of a 15th Century wool merchant around 1470. It received a new Mock Tudor style facade, designed by Pugin in 1834. Inside the foyer is all genuine from the pre-Tudor period and has original Oak beams in the ceiling with shields and swords hanging on the walls.

The auditorium (built in 1931) is in a Tudor style, with seating for 1,125 in the stalls and 550 in the circle. There were over 40 framed canvas murals by artist Frank Barnes representing hanging tapestries, hanging on the side-walls and other walls in the building. The ceiling has heavy wood beams (actualy made of fibrous plaster), and the walls were given a treatment to look like ashler stonework. There was a large restaurant which was again decorated in a similar Tudor style and it had Oak tables and chairs and inglenook fireplaces.

It was re-named Gaumont in 1937 and re-named Odeon by the Rank Organisation in August 1964. It was converted into a triple screen from November 1972 by creating two mini-screens in the rear stalls under the circle, seating 120 in each. In 1993 a fourth screen seating 70 was created in the former restaurant area and in April 1995 a fifth screen was created in the former front stalls area with a seating capacity of 278.

The cinema has lost some of its decoration, but there is still enough surviving today. It was designated a Grade II Listed building by English Heritage in 1984 (after the tripling).

The Odeon was threatened with closure and possible demolition in 1986, but this was averted by a strong local community protest and aided by the Listed Grade’s I and II of the building.

I really dont know what to say?? I’ll start with WOW!

And here’s a version of it you might be able to see without a magnifying glass!

In July 2018 I was asked by Claudia Materna, at ODEON, for permission to use my May 1998 image in a display the company was creating, at the cinema, to celebrate this historic movie palace. I was only too pleased to provide this, and the history wall, a permanent installation, was unveiled in October 2018. In these days of ever more futuristic, state-of-the-art all-digital multiplexes (such as ODEON’s own Luxe brand) it is heartening that the company is so mindful of its proud heritage. (Similar history walls have been installed at the ODEONs at Exeter, Weston-super-Mare and Glasgow Quay.)

David, that’s great, but what image is that? of auditorium?