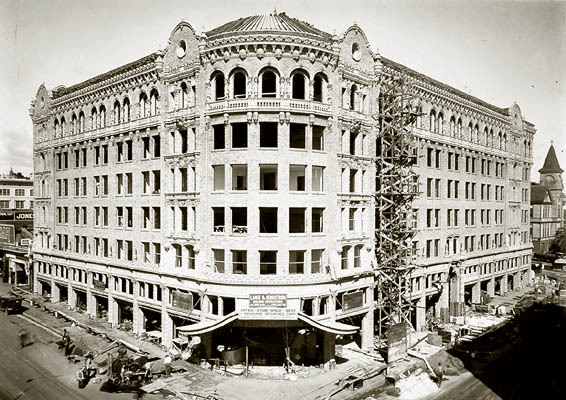 The 2,000-seat Pantages Theatre was opened March 10, 1924 presenting vaudeville. In 1929 it went over to movies and was renamed Orpheum Theatre. By 1941 it was operated by Fox West Coast Theatres and the seating capacity had been reduced to 1,400.

The Orpheum Theatre was demolished in 1964.

Built by Alexander Pantages, the Pantages Theatre opened on 10th March 1924 as a vaudeville house. A seating capacity of 2,000 was initially given. In 1929 it switched to films and was re-named Orpheum Theatre with a 1,400 seating capacity.

The Orpheum was demolished in 1964 and an office block built on the site.

The architectural style of the interior of the Pantages could be described as Spanish Deco, the decorations were by Anthony B. Heinsbergen. The organ chambers for the Robert Morton theatre pipe organ were located under the stage.

Herre are three photos of the auditorium:

and one of the Lobby:
View link