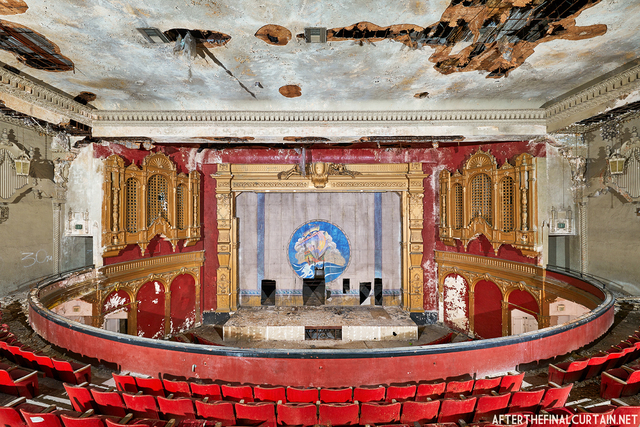 This Spanish Colonial Revival style theatre was opened on April 22, 1927 with Constance Talmadge in “Venus of Venice” & a Fanchon and Marco Revue “Book Ideas” on the stage plus Al Lyons and His Band. It seated over 2,200 patrons. It was built by and operated by West Coast Theatres and was equipped with a Wurlitzer organ. It presented vaudeville & movies until 1937 when it became a first run movie theatre. Mann Theatres were the last operators and they closed the California Theatre as a movie theatre in 1976. In 1978/1979 it was used by the Old Globe Theatre after its Balboa Park theatre building was damaged by arson.

The California Theatre was renovated in 1988, and was used as a concert venue, but two years later on June 20, 1990, it was closed after a concert by the Cowboy Junkies and a final concert on the Wurlitzer organ was held on 24th June 1990. The building was scheduled for demolition. The Wurlitzer organ was removed from the theatre soon after closing and was installed in the Trinity Presbyterian Church in Spring Valley, CA, but it was destroyed in an arson fire in 1996.

In 2001, in addition to restorations, plans called for a wide redevelopment of the entire area, which should bring the theatre back into the spotlight and out from the shadows of time.

So, apparently the “Davenport’s Supper-Club” idea to save the theater hasn’t happened. The building is as derelict as it has ever been, and that is a great shame. The California is not a “great” theater of the golden age, but it is nevertheless a useful period theater with a fully rigged stage-house, and could make a wonder quartet with the Spreckels, Balboa, and Fox (now Copley Symphony Hall/Jacob’s Music Center) as a district of historic theaters. Perhaps there’s one more miracle left in the bag for San Diego’s great theaters.

You are correct on both counts, the project hasn’t happened yet, and there is one more miracle left for the Grand theatre. The theatre has been closed for over 20 years, this project has taken 4 of them to develop. No bldg diagrams, inside access, assistance from anyone except my team and myself as the City changed politicians like most folks change socks.

The new government is engaged now, check LinkedIn &Facebook today for the latest updates, I only address comments on this site because folks still use it.

It’s not enough to say we should save it there had to be a viable solution pertaining to its use as well to offer the city, community orgs and the community. It had to pass and be accepted by all of them and this project has been. That is the dedication of time.

Although it would’ve been wonderful to just have the city “give” the bldg through imminent domain it’s easier said than done. They own the Balboa, and Civic Center, not this one. We are currently in discussion with City officials as to the process of this one. Getting the building saved is important to all concerned but if were just a matter of money it would have been done by now, it isn’t.

Over 150k of development costs have been spent of my own funds to get this far so failure isn’t an option for us and the time delays ( as those not privy to the process see it) are irritating but necessary.

LinkedIn and Facebook will have the updates tonight. Check there going forward as I understand the community need for info, we are in the final phases to have the support of new government and in talks with our funders the long road has the end in sight.

This will be my final reply on the blog site I’m pleased San Diego still cares enough to comment on it and talk about it here, but the main conversation is on LinkedIn (649 users for the theatre, in the top 5% on all of the entire site) & Facebook (125 users) the conversation there should bring you up to speed. Not to know what’s happening is frustrating for everyone concerned so I try to keep the information accessible but not spread all over the web. Hope to see you out there the new postings go up tonight.

This is just a fraud on the good people who want the HCT to survive. We all suspected this all along, but agreed to let it play out — now you see what we got — NOTHING BUT HOT AIR.

It is intact as of August 13, 2017. The marquee is gone (probably a long time) and there is some chain link on the sidewalk side. Nothing seems imminent.

Overture San Diego, the mixed use project slated to replace the California Theatre, has been waiting on official approval of its construction plans to begin demolition. The old office building on the corner of 4th and C, which once held the theater’s entrance, will be incorporated into the new project, but the auditorium is to be demolished and replaced by a new building with shops on the lower floors and several levels of parking both above and below, with the new residential tower rising atop that structure.

To me it seems almost adding insult to injury that the vertical “California” sign is to be duplicated on the old office building, and that the grill concealing the above-ground parking area will be decorated with a mural depicting the theater in its heyday.

You can see the plans for the project here. I’m sure the completed project will be an asset to downtown San Diego, but it’s unfortunate that the historic California Theatre will have been sacrificed to build it.

I am impressed that the office building will be be saved. A few decades ago a similar project would have just torn down the whole thing. This is a case of history vs economics. Unless a wealthy philanthropist were involved, realistically no one would save a historic live theatre if they can tear it down and replace it with something significantly more profitable. Hopefully what can be salvaged from it will be.

sounds like it is going to go by the wayside for the theatre part anyway…I was the very last manager of the whole building…and locked it up in 1990…too bad because we had a very viable building at the time….I knew that place inside and out very well….practically lived there, I spent so much time there day or night…even ran the projectors on certain occasions after it pretty much went to live shows…..still am involved with cinema theatre in Iowa…(digital projector nowadays) Dave at

NOTE: also the premiere of the Japanese cartoon film “AKIRA” was run there…I was the projectionist for AKIRA as a sideline to bldg. manager and engineer.

This building should be saved and restored and heritaged listed!!

UPDATE!!
A court has halted the demolition of the theatre.