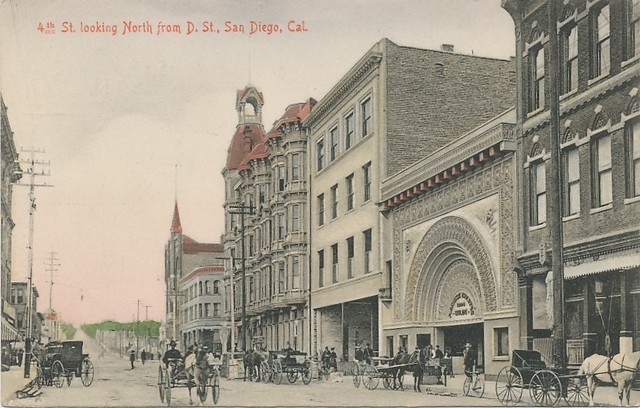 The Pickwick Theatre, designed by Hebbard and Gill was built in 1904 and opened on February 27, 1905 as a vaudeville theatre. It became a motion picture theatre in 1922. The Pickwick Theatre had a short life as a movie theatre as it was demolished in 1926.

Was the Gill of “Hebbard and Gill” Irving Gill?

The facade of this building was very Sullivanesque.

Irving Gill worked for Adler & Sullivan, Chicago (c1892) on Louis Sullivan’s famous Transportation Building for the World’s Columbian Exposition of 1893. The most memorable feature of that building was the great gold arch at the entrance. The façade of the Pickwick is an imitation of that great arch. Sullivan was the primary influence on Gill’s work and thought on architecture. Occasionally he resorted to direct quotation from Sullivan but later these influences evolved into Gill’s own, original language and philosophy of architecture.