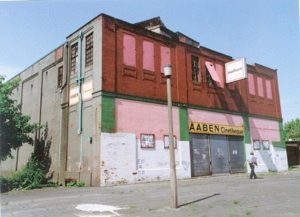 Opened in 1928 as the York Cinema, it was located on York Street, Hulme, an inner city district of Manchester. Seating was provided for 1,414 and in 1937 the operators were given as Thomas and Norman Royle, who operated it into the late-1940’s. By 1954 it was operated by York Cinema (Manchester) Ltd. and the seating capacity was given as 1,300.

In 1967 it was closed and converted into a bingo club, but this was short lived as in 1969 it was taken over by the Unit Four Cinemas Ltd. of Burnley who made one of their first conversions of a former single screen cinema here, when they converted the building into four screens, re-opening as the Unit 4 Cinemas. Seating capacities in the screens were 210, 101, 102 and 102. There was a bar and a snack bar for patrons. It was a 4 screen independent arts cinema from the mid-1970’s through to when it closed finally in 1991.

The last year’s of it life were rather troubled. In the late-1970’s it was re-named the Aaben Cinema when it was taken over by the then manager Geoff Banks who ran it as an independent arts cinema for the students and young professionals living in Hulme. Closing in 1983 - it was then taken over by Tony Fairclough (an ex-Odeon manager from Blackpool) who ran it for less than a year. About six months later it was reopened by myself and Steven Hagen (ex-proprietor of the Arts Centre Cinema Bristol). Hagen pulled out 6 month later and I got the lease off Fairclough and we ran it until 1990 when we closed it. Then for less than a year it was taken over by Robin Price ( a local operator who then ran a number of cinemas in the North West) - who ran it into the gound with it’s final demise in 1991, closing as the Cinetheque.

The building was left to rot, stripped of its assests by vandals, and eventually demolished in 1993 to make way for new housing as part of Hulme’s City Challenge regeneration.

Although it was far from being an attractive building, it was a hive of activity and film culture which led the way for Arthouse cinema in Manchester - a cinema for the people - unlike Manchester’s current art-house on Oxford Road.

I have very fond memories of this cinema in the 1970s. Saw many iconic films including China town, one flew over the cuckoos nest, the tenant and themroc! Vince.

I worked has a trainee projectionist at this Aaben cinema for about 3 months after leaving school in 1977. Even then it was a magnificent building inside. Always remember my last job when finishing at night was to go down into the basement and turn off all the exterior lights. Still sends shivers down my spine to this day. I did used to sneak down there with one of the young usherettes when all the films were running (young love). The manager used to send me to the bank with the weeks takings every week.(not an undertaking I would like to do now)

I used to walk past this cinema every day on the way to and from school. I finally got to go inside when I was taken by my mother, along with my brother and sisters to see Honey I Shrunk the Kids. I remember it being really impressive inside, live a classic old fashioned cinema. There weren’t many other people in the showing, although I do remember my mother’s partner getting up at one point and telling a group of kids at the back to be quiet. Going off the main entry here, that must have been very close the cinema’s closure in 1991. Even though I only went once, I remember a tinge of sadness seeing it pulled down.

This was a great cinema. Large seats and nice cafe. Very civilised. I remember turning up with my GF to see a Bogie double bill of Casablanca and the Maltese falcon. It was full booked, but they put on an extra show at midnight. Saw Barabarella, Breaking away and many other classics circa 1980

I only ever knew this house as The York and visited it in the 50s with my cousin, who lived nearby, whenever I stayed over on weekends. My one lasting impression of the place was that it had a very small, postage stamp, screen compared to others I frequented.