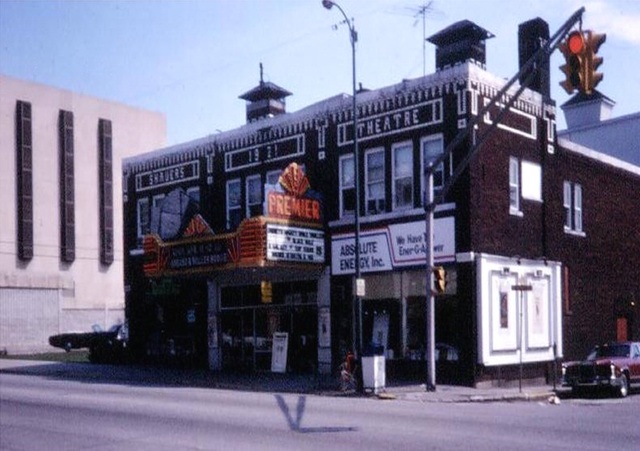 Architect Henry L. Newhouse, 4630 Prairie Avenue, is receiving bids on a two-story building, 72x82, to contain a modern theater with a seating capacity of 1,500, and stage, four stores, and fifteen offices, to be erected at a corner of W. Lincolnway and Lafayette Street in Valparaiso, Indiana, for the G.G. Shauer & Sons Company of that town. The theater will be fireproof reinforced concrete construction, with steel trusses, and the building will have pressed brick and stone front, steam heat, tile flooring, and will cost $ 100,000.

Later renamed Premier Theater, it was closed in 1981.

I drove past this theatre in the late spring of 1980. The lighted marquee was spectacular. The facade was dated 1921.

Facebook link with 65 photos of the Premier Theatre over the years.

Shauers Theatre was the original name. Address would have been 71 W. Lincolnway, per 1926 Sanborn Map added courtesy Kevin Matthew Pazour. Central Park Plaza is now on this site since 2011. Links with additional history and photos below. Flickr link with circa 1925 image below as well.

Closed 1981 shortly after the opening of 6 screens in the nearby mall.