and reopened as the State on April 2nd, 1949. Grand opening ad in the photo section. 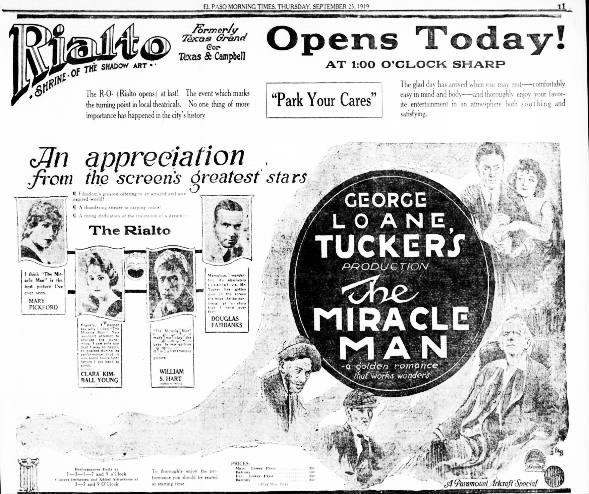 Watched many a flicks at The State, but The Capri was my joint.

The photos in the weblog post I linked to in me previous comment show that Street View on this page is currently set to the wrong building. The theater was in the building down the block to the left which has a sign reading “Alamo Shooters” on what remains of the marquee. The building has the addresses 108 and 110 E. San Antonio Avenue.

The Wigwam Theater was in operation by 1914, when it was one of five El Paso movie houses that shared a full-page ad in the August 29 issue of the El Paso Herald.

This post from weblog Deep Inside El Paso has a couple of photos of the Wigwam/State Theatre building (way down the page) and cites historian Cynthia Farah Haines as saying that the Wigwam Theatre was renamed the Rialto in 1921, then went back to Wigwam in 1922, and became the State in 1949. Haines also said that the Wigwam Theatre was designed by architect Henry Trost. The State began showing X-rated movies in 1981, but closed later that year.