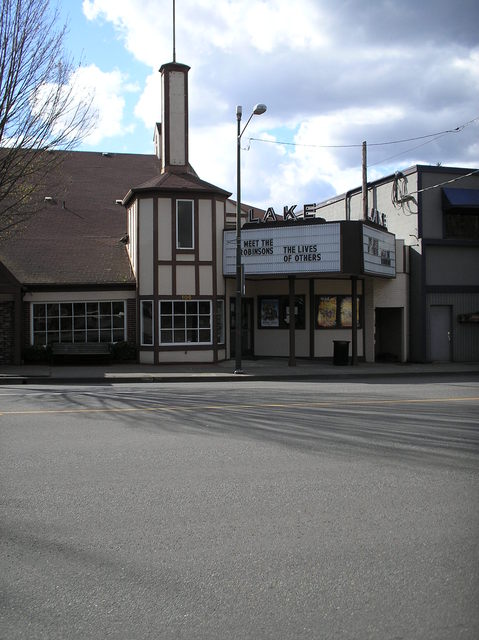 This is a small two-screener in Lake Oswego.

The Lake Theatre (as it was known in the 1950s and ‘60s) has a history of one of the great small town movie theatres.

In the 1950s it offered two features every night, with a cartoon and a newsreel. On Saturdays there was an afternoon matinee that featured at least two full movies, one or more cartoons and a couple of serials. The matinee cost a quarter!! (Is it surprising that my folks could always find 50 cents to get rid of my brother and I on a rainy Saturday in Oregon ?).

The Lake was originally established in Oswego before 1947. As a theater, it was intended to serve audiences that lived at one end of Oswego Lake. Many of us could walk to the theater. Remember that Oswego did not merge with Lake Grove and become ‘fancy’ Lake Oswego until about 1960.

The Theater I remember had a large main floor with a sizable balcony. We saw the first 3-D movies there. My first nightmares came from going to a movie that my mother thought was a comedy called the “House of WACS” !!!