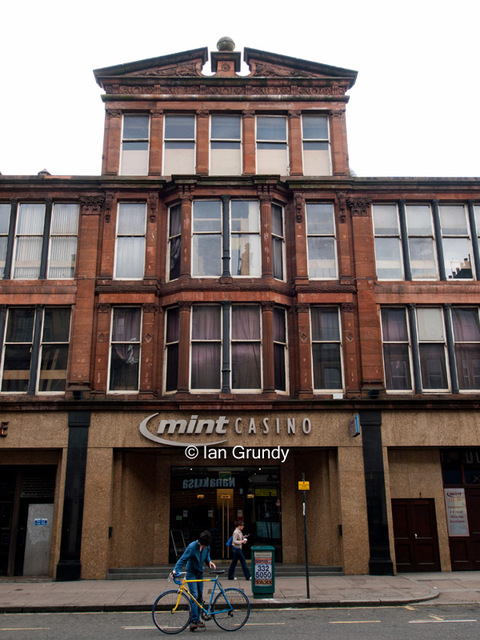 This was the first purpose built cinema in Glasgow. It retained a Neo-Classical style façade from a warehouse building previously on the site, which had been designed in 1898 by architect Alex Duncan.

The Charing Cross Electric Theatre opened 12th May 1910 with a programme of films in ‘Kinemacolour’ (hand tinted frames). It was operated by West of Scotland Electric Theatres. Seating in the auditorium was arranged on a stadium plan, with a raised section at the rear and no overhanging circle.

It was closed in April 1926 and went over to other uses. Later converted into the Locarno Ballroom which was very popular for many years. After the Locarno closed it became a casino in 1989 known as the Stanley Berkeley Casino and by 2009, was named the Mint.

The casino is now called Mint. No trace of the former cinema is evident, as it appears that the small auditorium block was replaced by a much larger structure for the ballroom. The ballroom also appears to have gone by several later names, including Tiffany’s.

Another June 2011 photo of the Mint Casino