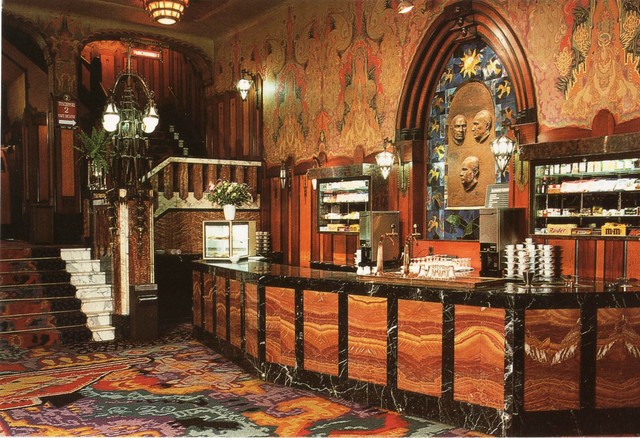 The Theater Tuschinski in Amsterdam is the Netherlands' most beautiful cinema and one of the greatest ever erected.

This Art Deco style movie palace was the crowning achievement of Abraham Tuschinski. A self-taught Jewish tailor from Poland, Tuschinski who was on his way to America in the early-1900’s, when he was waylaid in Rotterdam and ended up building a movie theatre enterprise in Holland instead.

Built in 1921, the Theater Tuschinksi was erected based on the designs of architect H.L. DeJong, with interior décor by Pieter den Besten and Jaap Gidding. The exterior is a cross between Art Deco and Gothic style architecture. The Theater Tuschinski was opened on 28th October 1921, with an original seating capacity for 2,000, on orchestra, balcony, and upper circle levels.

It has two very striking towers flanking the front entrance which in turn has two rather Gothic style lamps. The main foyer is executed in the Art Deco style in rich reds and golds - with its paintings of paradise birds and peacocks, its plush and colourful carpet hand-woven in Morocco, and its bar of bronze and marble.

The elaborate main auditorium is no less breath-taking earning the theatre the nicknames of ‘plum cake’ or ‘dowager bonbon box’. The building also boasted not only a great movie hall, but a cabaret-dinner club named "La Gaité", a Japanese tea room, a Moorish suite, and elegant foyers. Smaller auditoria’s have since been created from these rooms. The Theater Tuschinski was equipped with a small Wurlitzer organ, which was originally installed in the Cinema de la Monnaie in Brussels, Belgium, which was opened by organist Pierre Palla. This was replaced in 1923 by a 2 Manual 6 Ranks Wurlitzer model 160. In 1940 it was rebuilt by the Strunk organ company and a new 4 Manual console was added, and the Ranks increased to 10. This instrument was opened by Cor Steijn.

After the German occupation of Holland in 1940, it was re-named Tivoli Theatre, and began screening German made Nazi anti-Semitic films. Abraham Tuschinski, and most of his family and other directors of the theater were deported to Auschwitz in July 1942, never to return.

On 29th July 1945 the name Tuschinski was back on the façade. It was the most popular cinema in Amsterdam, and the stage was brought into use for concerts starring Judy Garland, Marlene Dietrich, Edith Piaf, Dizzy Gillespie, Fats Domino and Dionne Warwick. In 1969, the resident 16-piece orchestra was disbanded, and in 1974, the Wurlitzer/Strunk organ ceased to be a part of the regular programming. It was used in 1996 for the theater’s 75th Anniversary, accompanying screenings of silent films.

In 1986, the former Noggerath Bioscope Theatre almost next door, which opened in 1906, and had for many years been operating as an adult cinema, was renovated and converted into screen 3 of the Theater Tuschinski.

The historic auditorium ‘Grote Zaal’ currently seats 784. There is a classic film series which has a monthly slot in the programming. An additional five screens, ranging from 105 to 191 seats, are located in an adjacent building.

I asked the usher very politely if I could have a look inside the auditorium without buying a ticket, and he gave me one minute. It’s a funny mix of art deco/Jugend style, a bit of Nouveau, some South American influences and what have you—I think the foyer and the light fixtures impressed me the most. Didn’t have much time in Amsterdam, but will take in a movie next time (hope there is a next time!) to catch all the details.

I was in Amsterdam in 2007 and saw Little Miss Sunshine here. I’d seen it already at home in New York, but wanted to see it again. Seeing here was like seeing for the first time again. I’ll go again the next time I’m in this awesome city.

Europe has some truly beautiful movie Theatres,hopefully folks there don’t come to the movies in torn shorts and tank tops.

I am now visiting Amsterdam and just passed by the Tuschinski. The facade is now being thoroughly – and hopefully lovingly – restored. The downside is that, except for the two towers, the facade is invisible to the eye. It should, however, be something to see when the work is done.

Fortunately, the lobby is open to the public and is an absolute delight to behold. The shifting colors on the ceiling create a terrific and absolutely exotic effect.

This is, in short, an incredible cinema treasure – and its best days may still be to come!

Was on vacation in Amsterdam last week and made sure that I saw a film in this amazing theater. It is truly a sight to behold. Beyond the obvious beauty of the theater I was very impressed by the excellent sight lines in the main auditorium. The auditorium is almost as wide as it is long putting the viewer closer to the screen and creating a more intimate feel. The generous width of the theater also works very well with modern widescreen. Presentation was first class also. The projection was 4k Digital annd the digital sound was excellent. The theater Manager actually told me they are working on the sound to find the optimal system and balance in the large auditorium. There’s nothing like watching the curtains part to reveal the screen….a very rare treat these days. Another small but impressive detail was that the appropriate screen masking was even used for the previews. Wonderful experience. It’s unfortunate that all the great theaters in my own City have either been demolished or turned into Rite Aids.

I saw The Living Daylights here in 1987 whilst on holiday, great place to see it in.The film had Dutch subtitles but was spoken in normal English , but the Hollanders speak excellent English and thats from a Scot Bob Kincaid

My daughter did a semester at University of Amsterdam and came away learning about 5 words of Dutch because just about everybody in Amsterdam speaks excellent English (and many speak French and German also). In fact, I actually noticed many Dutch folks there lapsing back and forth between Dutch and English when speaking with each other, especially parents speaking with their children. It truly is an international city and a wonderful place. My only regret while in Amsterdam is not knowing that a 70mm Ultra Panavision print of The Hateful 8 was still playing on a properly masked 40' screen at the Eye Film Museum while I was there and I missed it.

I am a little bit in heaven every time I enter Tuchinski 1. It has such a gorgeous grandeur. I have so many fond memories of great movies I have seen there. Even if the movie is mediocre, simply the delightful experience of visiting this jewel of a cinema is still worth the while. The balconies are not open to public, but you can have a beautiful sneak peak from the second floor, when you have bought a ticket. You can reserve your own private sitting booth near the balcony (for 6 people), with champagne as a nice extra! It still has got curtains that can be drawn open before the picture begins, but they only use those at special events.Visiting Tuchinski 1 feels like coming home. Anyone can visit the lobby for free and if asked politely one could even be allowed to have a quick peak inside the truly gorgeous Tuchinski 1.

There are several short videos of the interior on YouTube.