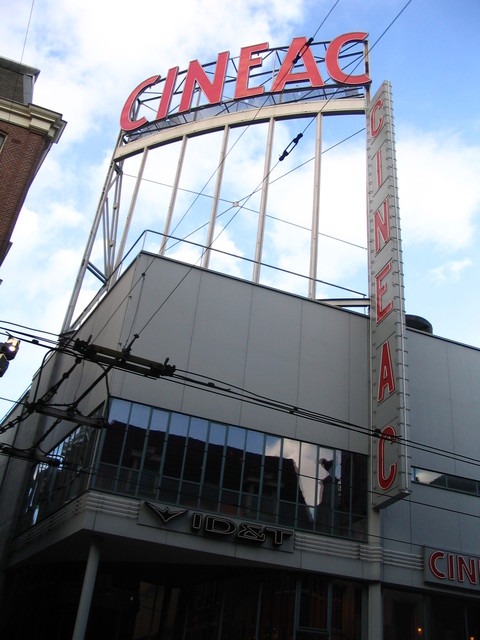 Operated by the Cineac chain of news theatres, this cinema was probably the best of its type. It was located directly opposite the famed Tuschinski Theatre on the narrow Reguliersbreestraat.

It opened on 18th October 1934 and the architect Jan Duiker managed to create on an awkward site an ingenious auditorium in which the projection room was tucked away, under the balcony. To open up the mystique of the operation of the cinema, the operations within the projection room (located over the front entrance) could be seen from the street as it had glass walls on two sides. There was a huge sky sign mounted on the roof of the theatre and the corner entrance had a box office on the street, no foyer was provided as patrons entered either left to go into the orchestra level or right to go into the circle. The auditorium was devoid of decoration apart from several troughs of concealed lighting. It was ‘egg shaped’, with the screen being at the ‘pointed end’.

After the demise of cinema newsreels in the 1960’s the Cineac went over to feature films, playing in repertory 2nd run movies at cheap prices. The last film played was Andy Garcia and Meg Ryan in “When A Man Loves A Woman” on 12th April 1995.

Unfortunately NO, it is still in use as office space at the front of the building and residential use at the rear. I believe the building is Listed and this could be the reason why the signage has been retained and restored. When it became a Planet Hollywood restaurant in 1996, some of the signage was removed and replaced with the P.H. name. P.H. closed this location in 1998.