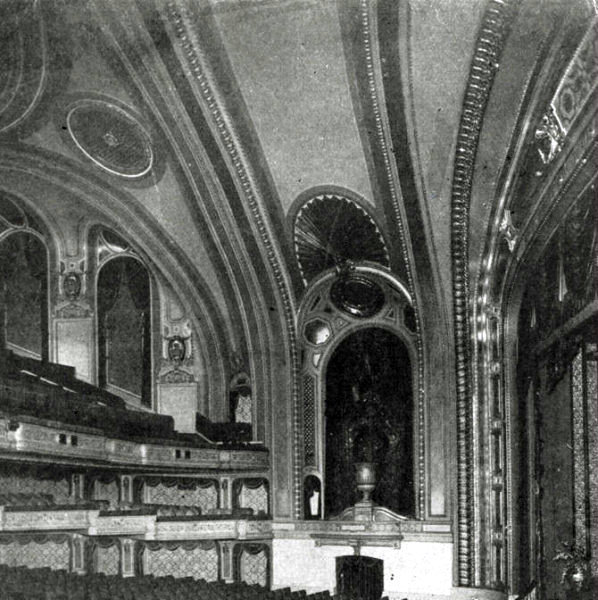 Aside from civic exhibition halls and recent stadia and outdoor amphitheaters, the largest indoor theatre ever built in Milwaukee was Saxe’s Wisconsin Theatre, "the flagship of their fleet of 28 theatres,"* which presented all 3,275 of its seats to the public on March 28th of 1924 smack in the middle of a blizzard.

The noted firm of theatre architects Rapp & Rapp of Chicago was commissioned to create the first of the four theatres they would do here. While they were not given the budget they enjoyed in creating the super palazzi such as the Tivoli Theatre and the Chicago Theatre in 1921, that extravagance was not needed here since the competition was much less in a smaller city.

Still, the Rapp’s did bring along some of their favorite features, such as a recessed orchestra pit that not only extended out toward the audience with the Rapp’s signature curve, but it also extended inward beyond the line of the proscenium arch to the concave front line of the stage. This not only allowed more room for the orchestra, but it also allowed for two organ consoles - but they both played the same 17-rank Barton theatre pipe organ to accompany the silent films.

This design also allowed the first rows of seating to be closer to the picture sheet (screen) which in that day was less than a third of the size we are used to today. Since this inward extension toward the stage brought the pit beyond the seal-off position of a dropped fire curtain, the authorities here and in Chicago, at least, eventually caused the owners to later remodel to the traditional pit line to be in front of the stage and beyond the line of the fire curtain for effective seal-off of the stage in the event of fire.

A feature that allowed so many seats on only a quarter of a city block was the addition of a mezzanine under the balcony. Only a few other theatres in the state used this more expensive form of construction. The reported $1 million spent on this project could not go to the theatre alone, for it was only part of the surrounding six story Carpenter office building. This part of the project was the work of local architect Martin Tullgren, but the Rapp’s were also responsible for a large Roof Garden dance hall on the roof of the building. Nearly a thousand people could dance up there in open-air refreshment in summertime in the days before air conditioning (actually, air cooling which the theatre below enjoyed) became common. The bandstand on the roof was also carried out in the French baroque used throughout the theatre.

For many years a darkened neon sign up there looked down upon the intersection of 6th St. and Wisconsin Ave. with the words "ROOF DANCING," a puzzlement to the younger generations who danced to rock, but never on a roof!

Those coming to the first real movie palace in Milwaukee (transitional theatres such as the Riviera Theatre in 1920 bore signs of the palaces to come) were not disappointed upon entering the Wisconsin Theatre’s white marble lobby with a split grand staircase carpeted in forest green leading to the mezzanine and balcony and to flanking arcades that had oil paintings and statuary to soothe those impatiently waiting to enter the auditorium for the next show.

Three huge chandeliers with rose colored light bulbs hidden behind a body of milk glass with candolier arms and crowns of stud lights in white frosted bulbs lent an elegant glow to the two levels of heavily gilded ornamentation in a myriad of forms. There were also six smaller chandeliers along the mezzanine promenade arcades.

Among the statues here was one of a Grecian maiden labeled "IONE," 8-½ ft. tall, of purest alabaster. Her demurely draped figure did little to reveal her origin as the parlor ‘maiden’ in one of the city’s former houses of ill repute! Just how this creation from Italy got to the theatre is not known, but before demolition it was removed to the lobby of Centennial Hall at the central library where its beauty and its appraised value of $50,000 adds to her value in the eyes of all who see her.

Entering the auditorium on any of its three levels one encountered a pleasant space, but one certainly less ornate than those accustomed to Rapp & Rapp’s other works might suggest. Their signature sunburst motif was present above the rather simple arches used along the walls from floor to ceiling on the balcony level. They were blind and filled with a celadon and ivory brocade overdraped with simple tied-back legs of dark crimson velour fringed in gold color rayon. Strangely enough, there were no chandeliers as one might have expected, but merely cove lighting from hidden bulbs in the dome coves in the ceiling and the soffits of the balcony and mezzanine.

The organ screens were rather like the balcony wall arches, but here they enriched the view with giant gilded urns of plaster which stood about 12 feet high upon their volute and plinth block pedestals. The balconnets supporting this also contained a number of hidden spotlights to highlight the glittered scrim cloth of the organ screens with changing angles and colors.

The gentle curve of the proscenium arch was nicely gold leafed, but its panels of ornaments lit by a cove only served to frame a Grand Drapery that was something less than grand. Its six velour swags in forest green were fringed in gold rayon and rested upon a lambrequin of silver satin panels fringed in green against a flat rear panel of celadon velvet plush also fringed in gold. Neither tassels nor pendants or drops were used.

Of course, none of this affected the fine stage shows which were seen with the movie, an organ recital, orchestra overture and trailers, all for 25 cents in the more expensive seats. This theatre did boast the only rising orchestra pit in Milwaukee but after 1963 it was one of many things which ceased to function.

On December 20, 1963 & December 23, 1963 this enormous theatre became just another anonymous cinema in order to stay in business. Flight to the suburbs was even faster here than in most cities, so the Wisconsin lost most of its audience and was split horizontally into the Wisconsin Cinemas I & II, in the hope that two screens would bring in enough revenue. It was usually just referred to as the Cinemas. A wall was dropped down to the balcony rail and the balcony became Cinema II. The mezzanine was closed off for good and the orchestra floor became Cinema I, sans orchestra and sans pipe organ.

Out in the once grand lobby, the chandeliers were discarded, a giant stainless steel concession stand was installed and a remarkable ‘flying’ double escalator rose from the new aluminum and plate glass doors (the original bronze ones were junked) upward for four stories to pierce the ceiling and directly invade the balcony foyer now spray painted in tan (who needs gold leaf?!) and carpeted in a synthetic fiber and pattern of geometric shapes - the same pattern applied in a jarring way to the once elegant auditorium ceiling.

A garish electric sign informed the audience that the concession stand was open or if it was about to close; money was then made on candy and popcorn, not movies. And advertisements began appearing with the films; anything to make a buck!

Few of the light bulbs worked any more and few of the patrons came any more and so the Cinemas were frequently closed until finally the insurance company on the other side of the block was bought by ambitious people who persuaded the city to condemn all the buildings on the entire block for a proposed giant skyscraper.

Attorneys spent three years locating over 100 heirs of the Carpenter estate alone, and demolition proceeded in 1986, but by then the purchasing company went bust and the city was left with a large vacant lot. Not to worry, for in a few years state and local funds were appropriated to build a new two-city-block-long convention center which will hold more people at taxpayer expense than the WISCONSIN ever did.

Thanks for the ads,always great to look at all of them.

When I opened this page and seen that “Move Over Darling” was on the marque, I almost fell off my chair. I seen it their on a very cold December day.

I saw Astro-Zombies at this theater. It was part of a horror triple feature upstairs and played with House of Whipcord or some such title. The next day I returned and saw the three kung fu movies playing downstairs. Dennis

A Golden Toned Barton Theater Pipe Organ, 3/17, manual/ranks, keyboards/set of pipes, it had TWO CONSOLES, was shipped from the Barton organ factory in 1924. It seems the organ was removed around 1963? What happened to the organ?

Photos of the Esquire, Strand & Wisconsin Theatres in below 2/11/16 link.