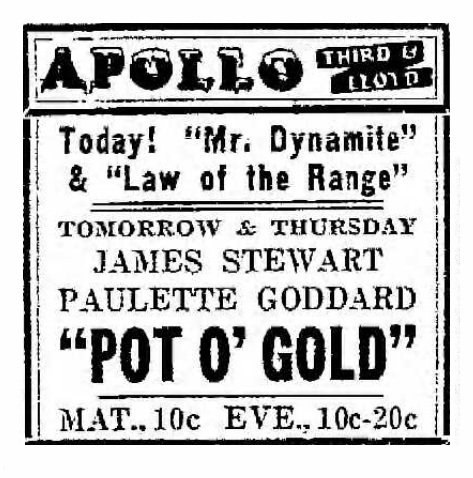 Here is part of a December 12, 1976 article in the Delaware County Daily Times:

On Wednesday, November 17, 1976, a general alarm fire destroyed the abandoned Apollo movie theater in Chester. To this Chesterite it was not just another of many wasteful fires that plague our battered town. No indeed. This fire stirred many fond memories of my youth concerning Chester’s movie theaters.

MY FIRST sight of the Apollo Theater came upon a warm, sunny afternoon in September. A newly made friend named Dave was giving me a guided tour of the 3rd Street area, and eventually we happened upon the Apollo. The marquee proclaimed that “The Cat Woman” and another, now forgotten feature was playing. Naturally, we two 8-year-olds wanted “to see them, but unfortunately we had exactly 3 cents to our names. Happily, an usher taking a smoke break outside noted our dilemma and took pity on us; he let us in. He also took our 3 cents.

Some Chester theaters such as the Stanley and the Washington have been torn down. The others? They sit there like derelicts waiting to be demolished or burned down like the Apollo. Today, if a Chester resident wants to see something besides X-rated movies they’ll have to get in a car or ride a bus somewhere else.

One can only conjecture as to why ALL these theaters have closed down, one by one, but the stated reasons are usually; fights, muggings and poor attendance. Whatever the reason(s) I do know this much; my kids, and thousands of others who live in Chester will probably never know what it’s like to have a neighborhood theater on a Saturday afternoon.

I never made it down to Chester when I was living in Philly. Probably because I had no car and no driver’s license.