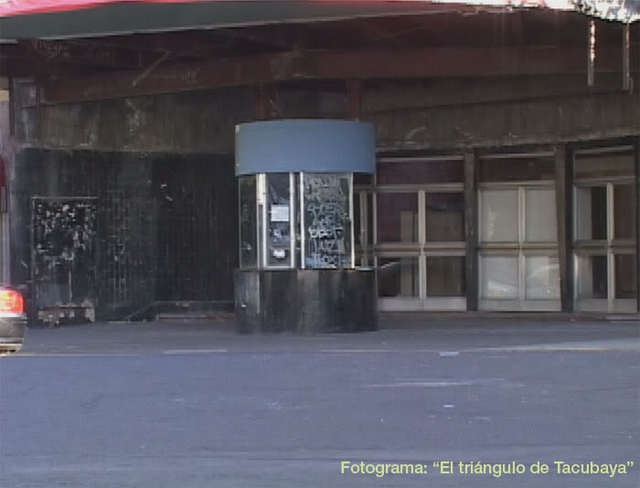 The Cine Lido was one of five theatres in Mexico City that were designed in the 1940’s, by the noted theatre architect S. Charles Lee from California, USA.

The Cine Lido opened in December 1942 in the Hipodromo district in the south west of the city centre. It fell into disrepair after closing as the Cine Bella Epoca in the early-1990’s. By 2005 it had been restored as the Bella Epoca Centro Cultural and library

Built on a corner site of Tamaulipas Avenue and Benjamin Hill Avenue, the entrance facade is very similar to Lee’s; Bruin Theatre, Westwood, Los Angeles (1937) but with the addition of a 120 foot tall tower on the right hand side. The style of the theatre is Art Deco and a feature of the auditorium were the coves of concealed neon lighting in the ceiling, which also had ‘black lighting’ effects that played on the graphic designs on the walls and the patterned carpet

The Cine Lido is listed as having a seating capacity of 1,310 and it opened on 25th December 1942 with the MGM production “A Caza De Nova”(Her Cardboard Lover) staring Norma Shearer and Robert Taylor.

Rather than being catalogued either as an art moderne or art deco building, the outside was rendered in some sort of neocolonial styling, tiles and all, while the interior was rather “neo-rococo”, if such a thing exists. Large gold flourishes circled the screen and covered the walls and the ceiling in the auditorium. This was in one level: no balcony here.
The lobby area was treated to the same kind of decoration.
All this was discarded when in the late 70’s a remodelation left the auditorium bereft of visual interest, painted white with some vertical wood strips adorning the walls. The lobby was transformed into a very theatrical place, lined with large mirrors and posters of the famous. The name was changed to “Bella Epoca”.
The Lido/Bella Epoca closed in the early nineties, and remained abandoned until very recently, when it has been converted to a library, so the building is alive and well.