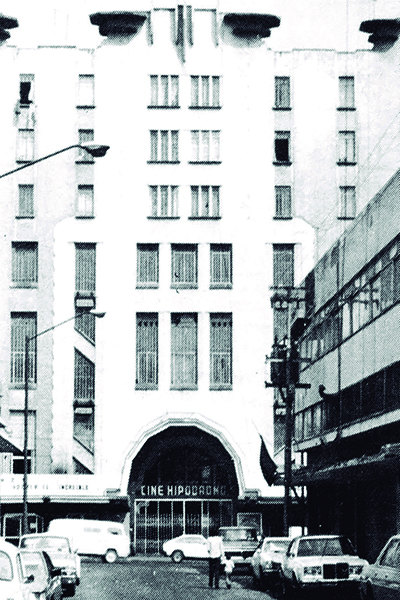 Located in the Tacubaya district of Mexico City. The Cine Hipodromo opened 11 April 1936 with 2,190 seats. The Cine Hipodromo is located in the Edificio Ermita (Ermita Building was the first high rise building in Mexico City and is eight storeys high). The entrance is on Avenida Progreso and the building is on a triangular site, which is bounded by roads on all three sides, the other roads being Avenida Revolucion and Avenida Jalisco. The building and cinema were designed by architect Juan Segura.

The Cine Hipodromo was still operating in 1971, when it had a reduced seating capacity of 1,005. Later closed and abandoned, there was talk in 1993, of it re-opening. In 1997 it was converted into an eight-screen cinema. It is now known as the Teatro Hipodromo Condesa (Theatre Hippodrome Countess), operated by the Lumiere chain.

More information would be appreciated.