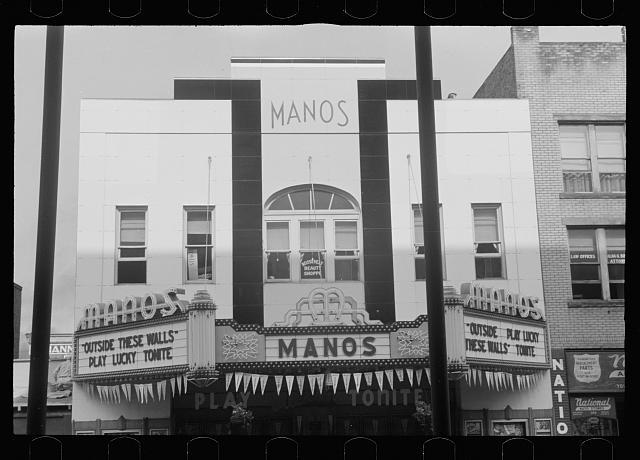 The NRHP registration form for downtown Elkins' historic district lists the Grand Theatre building at 205 Davis Avenue as a contributing structure. It was built in 1909. No architect is named, but the builder was T.R. Whiteman. The Manos Theatre’s front is obviously the result of a later modernization, probably in the very late 1930s or the 1940s, judging from the style.

Front is now ugly fake stucco siding and while the bare frame of the marquee is still up, it’s lost any interesting features.

The Manos, was part of Manos Enterprises, that headquartered in Greensburg, PA. The Manos Elkins Theatre was owned by a Sister of the Manos Group. Marie Kostalkos. In in 1975 a Twin was build in the Tygart Valley Mall, and the Manos was closed. The Manos was eventually sold to an office supply company. The Elkins twin, wa taken over by Marie’s son Nick, and he has expanded the theatre to 8 screens, and also operates a six plex in Buckhannon. The bookings for the theatres was handled by the Greensburg Office, and all accounting was also done there. The Manos Enterprises closed was sold in November 1993 To the Carmike Chain. After the sale the family other than Nick was no longer involved in the business, ending an 88 year run in the theatre business. I managed the twin in 1976 to early in 1978 when I was transferred to Olean New York, and Nick took over operation.